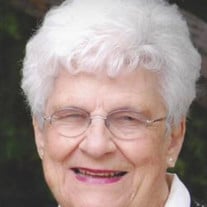 Bernice K. Walch, 89, passed away peacefully on May 8, 2014. Bernice was born in to the loving family of Erich W. F. and Harriet Alene Smith Kunkel on April 24, 1925 in Salt Lake City, Utah. She grew up in the small farming community of Lake Breeze, UT. She attended schools in Salt Lake City, graduating from West High School; class of 1943. Bernice attended Brigham Young University. Where she received her Bachelor’s degree in Education. While attending BYU, Bernice met Oscar W. Walch. The two were married “in the light of the moon” on September 22, 1949 in the Salt Lake City Temple. Bernice and Oscar started their family of 6 children and moved to Provo, UT. When their youngest was in school, she returned to school and received her Master’s of Business Education from BYU in 1970. Shortly after obtaining her degree, Bernice became a breast cancer survivor. For 20 years Bernice touched the lives of countless special education students at Oakridge with her many talents and love. After retiring in 1993 Bernice and Oscar served the people in the Suva, Fiji LDS Mission. When their time in Fiji came to an end, Bernice and Oscar traveled around the world. Bernice actively served and participated in Pro Libris, Daughters of the Utah Pioneers, and the Freedom Credit Union’s Board of Directors. Bernice was a devoted disciple of Christ as she served her family, friends, and fellow men in every capacity. Bernice is survived by her Husband of 65 years, Oscar W. Walch and her children; Bernell Walch, Tana Hunter, Zina (Sarun) Johnson, Anita (Mark) Allen, and daughter-in-law Veronica Walch; 13 Grandchildren and 11 Great Grand Children. She was preceded in death by her sons, Warren W. Walch, and Erich C. Walch. The family expresses deep appreciation for the kindness, compassion, and dedicated service of the Encompass Hospice team. Special thanks to Robyne Peabody and Sue Bergin. A celebration of Bernice’s life will be 11:00 a.m, Tuesday, May 13, 2014 at the Oak Hills 7th Ward LDS Chapel, 1038 North 1200 East, Provo, UT. Viewings will be at the church Monday from 6:00 to 8:00 p.m., and Tuesday prior to services from 9:45 to 10:45 a.m. Interment at the Provo City Cemetery.

Bernice K. Walch, 89, passed away peacefully on May 8, 2014. Bernice was born in to the loving family of Erich W. F. and Harriet Alene Smith Kunkel on April 24, 1925 in Salt Lake City, Utah. She grew up in the small farming community of Lake... View Obituary & Service Information

The family of Bernice Harriet Kunkel Walch created this Life Tributes page to make it easy to share your memories.