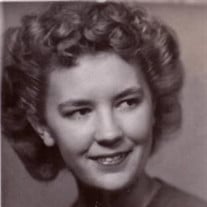 Betsy Joy Willes Thomas, matriarch and caring friend, passed away January 5, 2022, at her home in West Jordan, Utah, at the age of 93. Betsy was born to Reynold and Wanda Johnson Willes on July 29, 1928, in Idaho Falls, Idaho. She grew up in Dubois, Idaho, where her father ran a service station, her mother was a leader in the local Church of Jesus Christ of Latter-day Saints congregation, her older brother Dale regularly tried to scare the dickens out of her, and she and her brother Bill drove a jillion trillion miles in a totalled Ford coupe. After graduating from high school in 1946, Betsy spent a year at BYU. She nearly got engaged to someone, but when she returned home for a visit, she discovered she was already in love with the boy next door: rancher, dancer, and overall charmer Walter James Thomas. They were married on November 16, 1947. Years later, on November 16, 1981, they were sealed together. Betsy and Walter lived in many places around the western United States as Walter fought to support the family through a variety of jobs and farms. Through it all, Betsy was known for her loving heart, considerate nature, and hard work. She became an expert quilter and won many prizes at state fairs. Many of Betsy’s later years were spent caring for Walter after he narrowly survived a train accident. She looked forward to the day she would go to Heaven, see Walter’s mother, Mary, and get a hug. She’s gotten that hug now. Betsy was preceded in death by her parents, her brothers and sisters-in-law, and her children Renee and Evan. She is survived by her husband; children Candy (Russell) Powell, Toni Martens, and Lon (Beverley) Thomas; daughter-in-law Nola (Bob) Philpot; 16 grandchildren; 40 great-grandchildren; and 3 great-great-grandchildren. There will be a funeral service in Betsy’s memory on Saturday, January 15, 2022, at 11 a.m. at the Church of Jesus Christ of Latter-day Saints chapel at 7645 S. 3200 West, West Jordan, Utah. There will not be a viewing. The service will be streamed online via Zoom at: https://us02web.zoom.us/j/6232320110?pwd=UUNGRHFkZXA3WGJJNUNYY2JZYUs0Zz09.

Betsy Joy Willes Thomas, matriarch and caring friend, passed away January 5, 2022, at her home in West Jordan, Utah, at the age of 93. Betsy was born to Reynold and Wanda Johnson Willes on July 29, 1928, in Idaho Falls, Idaho. She grew up in... View Obituary & Service Information

The family of Betsy Joy Willes Thomas created this Life Tributes page to make it easy to share your memories.