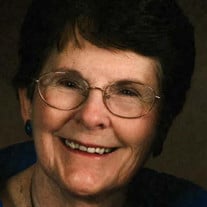 Betty Jean Gordon Lambson, born September 1, 1932 in Castle Gate, Utah, died on July 23, 2016 after complications from a fall in her home. She left this mortal life peacefully with family by her side. Jean left a lasting legacy of love for family, faith in God, and a kind and charitable spirit that touched the hearts of all who knew her. Jean was born into very humble circumstance during the Great Depression. During this time her family lived in a tent for several months on Redwood Road in Salt Lake City. Jean was the fifth child of a close-knit family of eight children. Throughout her life, she appreciated the blessings of family and cared little for material things beyond necessities. After graduating from West High School in Salt Lake City, Jean met her future husband Ken, while working New Years Eve at the Hotel Utah. They married less than three months later, a union that would last over 62 years until Ken’s passing in 2013.A lifelong member of the Church of Jesus Christ of Latter day Saints, Jean served with enthusiasm and distinction when called upon. Among her many callings were Relief Society President, Stake Young Women's President, and Primary President. It was perhaps the teaching and mentoring of young women that gave her the greatest fulfillment. Jean will be remembered for generations to come for her devotion and love to numerous family and countless friends. She was mother to five children: Alan, Michael, Steven, Pamela (with whom she is now joyfully reunited after 39 years), and Chris, and grandmother and great grandmother to many more. Jean was the glue that bonded her family with love, as she worked hard and righteously to teach and mentor her children, and husband into understanding the true value of a close family. Through example and word, Jean taught her children through virtues such as kindness, compassion, love for Heavenly Father and Jesus Christ, and a love for people of all races, colors, and beliefs. Jean had a spiritual gift to know what was going on in the lives of many, many people. She rejoiced in their happiness, and shared their grief when times were hard. She often went out of her way to help family in need and strangers too, even when it was very difficult for her. If you wanted to know what was going on with someone from the past, there was a good chance Jean would know. In recent years her use of social media allowed her to connect and share the joys of life with even more old friends and family. This gave her great joy, and her warmth and love could be felt through this new medium by everyone. Jean considered this to be nothing short of a miracle. Most of her life she rarely forgot a birthday among her posterity of well over 70 people. Mother, wife, grandmother, and great grandmother, your life has been one filled with boundless love and nurturing for many family and friends. Enjoy your sweet reunion with Pam, Ken, your parents Reed and Elizabeth and your brothers and sisters who have gone before, and be assured that your love and influence will live on in the lives of all who knew you. Jean's funeral will be held at 11:00 a.m. on Thursday, July 28 at the Midvalley Sixth Ward Meetinghouse, 1106 E 8050 S, Sandy, Utah., preceded by a viewing from 10:00 to 10:45 a.m. There will be a viewing Wednesday night, July 27 at the same address, from 6:00 to 8:00 p.m.

Betty Jean Gordon Lambson, born September 1, 1932 in Castle Gate, Utah, died on July 23, 2016 after complications from a fall in her home. She left this mortal life peacefully with family by her side. Jean left a lasting legacy of love for family,... View Obituary & Service Information

The family of Betty Jean Lambson created this Life Tributes page to make it easy to share your memories.