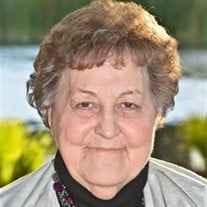 Betty Laverna Ontiveros, 83, beloved mother, grandmother and great grandmother, passed away April 1, 2020, in Sandy, Utah. Betty was born on September, 23, 1936, in Taylorsville, Utah. She was one of six children born to Lamont and Laverna Beecroft. Shortly after Betty was born, her family moved to a farm in South Jordan, Utah. She loved growing up on the farm. She especially enjoyed working along side her father and riding horses bareback on the farm. Betty learned the value of hard work while growing up on the farm. This is a trait she would carry with her for the rest of her life. She always had a sparkle in her eye when sharing stories about life on the farm. Betty graduated from Jordan High School in 1954. After graduating from high school, she worked as a waitress at a local Riverton café. In 1955 she had her first son, Leland Moss, from her first marriage. Later, while working at June’s Café she met her future husband Mike Ontiveros. They were married in 1959 and would live in Salt Lake City until 1964 where they had their first of two children, Kevin and Randy. In 1965, they moved to Sheridan, Wyoming for one year where their third child was born, Michelle. Shortly after Michelle’s birth they moved for a short time to Austin, Texas, before moving to Rapid City, South Dakota for the next five years before heading to live in Germany from 1970-1975. Betty loved her years in Germany. In 1975, Betty and her family moved to Tucson, Arizona, which would be her home for the next forty years. During her first year in Tucson, Betty went to work as a store clerk for a Circle K convenience store that was close by her Tucson home. She was quickly promoted to a store manager and managed a Circle K store for the next 35 years until she was 76 years old. Betty loved working at Circle K. She made many friends with customers and their families, who would come in daily to visit her. She also became very close with two co-workers, Mary and Susan, with whom she worked with for twenty years. Betty was a lifelong member of the Church of Jesus Christ of Latter-Day Saints. While in Tucson, she served in various callings in the Relief Society and with the Young Women’s Program. More than anything, Betty loved spending time with her family. She loved to host holiday gatherings, birthday parties, and many other life celebrations. She always made sure everyone felt loved. Her children and grandchildren always loved spending time at Grandma’s house where she would spoil them with their favorite treats. Betty was preceded in death by her husband Mike, son Randy Ontiveros, father Lamont Beecroft, mother Laverna Beecroft, brother Joseph Beecroft, sister Thora Thayne, brother David Beecroft, and brother Charles Beecroft. Betty is survived by son Leland (Monica), son Kevin (Tonya), daughter Michelle (Jay), daughter-in-law Tina Ontiveros, brother Bruce (Roma), 16 grandchildren, and 4 great-grandchildren. She was a much beloved mother, grandmother, and friend. She will be deeply missed. There will be a private viewing and graveside service on Tuesday, April 7, 2020. She will be interred at the South Jordan Cemetery.

Betty Laverna Ontiveros, 83, beloved mother, grandmother and great grandmother, passed away April 1, 2020, in Sandy, Utah. Betty was born on September, 23, 1936, in Taylorsville, Utah. She was one of six children born to Lamont and Laverna... View Obituary & Service Information

The family of Betty Laverna Ontiveros created this Life Tributes page to make it easy to share your memories.