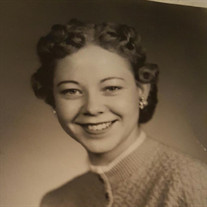 Beverly Slade Bowerman 1937 - 2016 Our beautiful loving Mom, Wife, Sister, Aunt, Cousin, Grandma and Friend, Beverly Slade Bowerman, was called home on October 31, 2016, at the age of 79. Beverly began her life in Del Norte Colorado on April 28, 1937 to the parents of George and Lucile McClanahan. She was the oldest of 5 children. She attended all of her schooling in Del Norte Colorado. At the age of 13 she came across her first trial in life, non-paralytic Polio. She fought her way through with physical therapy, and grew into a beautiful strong young woman. Her favorite pass time from an early age was dancing. Many fond memories in her life were created with dance. One of her favorite things to do with her siblings was to teach them how to dance, she taught them the Jitterbug, the Charleston and the Boogie Woogie. Her brother George Wayne picked up on dancing so well, Beverly nick named him Boogie. Beverly left Del Norte at the age 17 before finishing High School to work in Durango Colorado as a telephone operator. Not long after moving she meet Monte Slade at a dance, they married and had 4 children. She was bound and determined to finish her schooling. While raising her new babies she worked very hard and accomplished her goal by receiving her certificate and GED. This was a very important achievement for her and made sure she let everyone know that she had finished her schooling. Beverly's greatest legacy was her family. She found pride is all she did, especially when it came to taking care of her family. She was an excellent cook, her son Doug remembers her saying "Eat those vegetables, they are so good for you." to him they were nasty vegetables. Mom was an excellent seamstress, she made her two daughters beautiful Easter dresses every year. She enjoyed the art of embroidery and made many pillow cases, as well as, dish towels for her loved ones. Her son Bryant would put rubber snakes in her bed, put aka seltzer in his mouth and pretend he was having a seizer. It’s surprising he didn’t give mom a heart attack! Beverly was active in the LDS church. After her divorce she meet LD Bowerman, whom she married and was later sealed in the Provo LDS Temple. LD's job allowed them to traveled all over the United States. Erin Henriod, their granddaughter was one of their travel companions. She and LD had a immense love for all animals, Beverly (Kitty Cat Grandma) was loved and cherished by all of 17 grandchildren and 32 great-grandchildren she had. Beverly is survived by her siblings: Phyllis Bennett, Charles (Leota) McClanahan, Alice (Ken) Black and Georege Wayne McClanahan. Beverly will be missed by her husband LD Bowerman his 3 children; Anita Bowerman, Ricky Bowerman and Richard Bowerman, her children; Bryant (Deb) Slade, Cheri (Doug) Henriod, Doug Slade, 18 grandchildren, 36 great-grandchildren and many nieces and nephews she dearly loved. We all will miss her kisses will miss her hugs we know she’ll watch over us from above! She is preceded in death by her daughter Donca Lewis, daughter in-law Dena Slade, grandsons Zachary Lewis and Travis Earl. Funeral services will be held on November 9, 2016 at 12:00 pm at the LDS Chapel located at; 2530 West 200 South in Provo, Utah. ln lieu of flowers a memorial fund has been set up in the name of Beverly Bowerman at Mountain America Credit Union. We would like to thank those that cared for her at Lakeview Assisted Living, Jens was so caring for our mom in her final hours. Canyon hospice, Tony, Monica, Marie, Kelsey and many volunteers that gave up their time and she'll love for our sweet mom. The volunteers were Kim and Jason. Also a thank you to our sweet friend Michelle for her love and support when mom passed away.

The family of Beverly Slade Bowerman created this Life Tributes page to make it easy to share your memories.