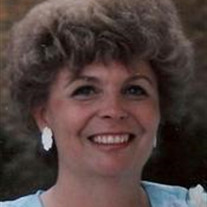 Beverly Jean McCready James, 69, passed away Friday, November 15, 2013. She suffered from Atypical Parkinsonism, more commonly known as MSA (Multiple System Atrophy). She was born October 14, 1944, in Akron, Ohio. She was the middle child and only daughter of John Elmer and Agnes Rae Anderson McCready. She graduated from Tallmadge High School in 1962 and from Riggs Le Mar and Sayre Beauty School in Cuyahoga Falls, Ohio in 1963. She married Larry Allen on October 14, 1965. To this marriage was born a son, David. She divorced Larry and moved to Phoenix, Arizona, where she met and married Jay James, January 29, 1971. The marriage was later solemnized in the Manti LDS Temple on March 27, 1975. They were blessed with three wonderful children. Jay adopted David at the age of three years. She was most happy being with family for barbeques, birthday parties, holidays and other family gatherings. Her infectious laugh warmed the hearts of everyone. She is a member of the Church of Jesus Christ of Latter Day Saints and served in many positions; Relief Society President, Young Women’s Presidency, Primary Presidency and teacher. She is survived by her husband of 42 years, Jay James; children, David and Heather James, J.D. James, Lori and Jared Tanner, Tyson and Summer James, brothers, Thomas and Sheila McCready and Jack and Joan McCready. She has six grandchildren; Jase, Paige & Kate James, Dylan, Cole and Alexis Tanner and nieces, Kelly, Katie and Kristen McCready. She is also survived by her beloved French Bulldog, Chocolate. Chocolate has been her constant companion and protector for 12 years. She was preceded in death by her parents, John and Agnes McCready. Funeral services are set for Wednesday, November 20, 2013, at the Fayette, Utah Ward Chapel, with Bishop Keith Bartholomew conducting. A viewing will be held at 9:00 a.m. with the funeral following at 11:00 a.m. Compassionate service was provided by the Spanish Fork Canyon and Fayette Wards. A very special thank you to Rosemary Warner for many hours of care and to Rodney and Mary Scobel for their love, friendship and daily meals.

The family of Beverly Jean James created this Life Tributes page to make it easy to share your memories.