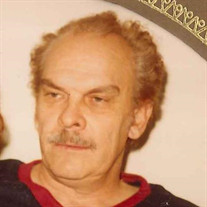 Billie Daun Williams, was born in Salt Lake City to the parents of Walter Ruben and Lilly May Underwood. Brothers, Wayne, Jake, Joy, Heber, and a step brother Don. Billie married Virginia Ann Meisel on November 10, 1951 together they had five children, Rick (Arvila), Debbie, Christy (John), Kryger, Michael (Jenny), and Mark (Joanne). Billie was a jack-of-all-trades; his intelligence was off the charts. He was an Eagle Scout, loved science, and history. Billie loved to play chess and had an eye for art. He is survived by wife Virginia, brother, Heber, son Michael, two daughters, Debbie and Christy, twelve grandchildren, twenty-three great-grandchildren and four great-great-grandchildren. He was proceeded in death by his parents, Walter and Lilly, brothers, Wayne, Jack, Joy and Don; sons, Rick and Mark. Funeral Serives will be held at 11:00 a.m. on Friday December 14, 2018 at the Church of Jesus Christ of Latter-day Saints 5913 South Highland Drive, Highland, UT, with the viewing one hour prior. Graveside services will be at 2:00 p.m. at Redwood Memorial Park.

The family of Billie Daun Williams created this Life Tributes page to make it easy to share your memories.

Billie Daun Williams, was born in Salt Lake City to the parents...