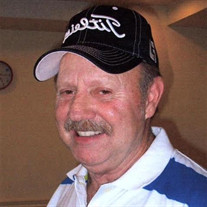 Billy Richard Olsen 1943 - 2017 Billy Richard Olsen passed away surrounded by his loving family on October, 14, 2017. He was born July 3, 1943 in Ephraim, Utah in his great grandparents’ old house to Howard Lincoln Olsen and Leona LuDean Ericksen. Later they moved to Provo, Utah where he attended the Maser and Franklin elementary schools, Dixon Junior High, a couple of years at BY High, then graduated from Provo High School. After high school he joined the Army Reserve and went to Fort Ord, California for basic training. Once that service was completed, he joined the Utah Army National Guard where he retired as a Staff Sergeant E6 after 24 years. He married Cindy Bates on November 7, 1980 and they had two sons. They later divorced. He married Nympha Bongcawil in the Philippines on April 4, 2009. Bill worked as a mortician in Fort Wayne, Indiana, then moved to Utah and worked at Turf Sprinkling, Signetics, then Valtek, where he retired. His hobbies included: panning for gold, fishing and restoring antique vehicles – winning many trophies with them. He is survived by his wife Nympha, two sons: Richard Olsen, Dustin Olsen, one step-daughter: Arnie Bongcawil one granddaughter: Shelby Olsen, a brother: Jim (Shelley) Olsen and one brother-in-law: Jerry Lees. He was preceded in death by his parents, sisters: Nancy (Gene) Hansgen and Gloria (Jerry) Lees, as well as his brother-in-law, Gene Hansgen. Funeral services 11:00 am, Saturday, October 21, 2017 at the LDS Chapel at 1402 South 570 West, Provo, Utah with a viewing prior to services from 9:30 to 10:45 am.

The family of Billy Richard Olsen created this Life Tributes page to make it easy to share your memories.