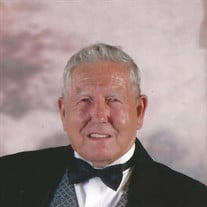 Obituary of Billy Carl Tresner Sr. Surrounded by his family our beloved husband, father, grandfather, great- and great-great grandfather Billy Carl Tresner Sr. aged 87 passed from us on Saturday, April 9th, 2016 at 12:00. He was the firstborn of Archie Carl Tresner and Marjorie Hope Gaddis Tresner. The three children born to them were Billy Carl, Evelyn Lorene, and Darrell Dean. Billy was born on March 30th, 1929 in Wann, Oklahoma. He loved being raised in Oklahoma, southeast Kansas and Arkansas where he swam the rivers, roamed the fields and “saw the wind.” The family faced the hardships of the great depression and moved to Twin Falls, Idaho in 1947. Billy graduated from Kimberly High School where he played on the football team in 1948. He joined the U.S. Air Force in 1948-1952 where he became a clerk typist and served in Alaska and the mainland. On furlough, he married Doreen Tubbs on February 28th, 1952. After being stationed in California they returned to Idaho where Billy then obtained an associate degree in 1954-56 from Idaho State College in Pocatelllo. During these years in Idaho Billy joined the Church of Jesus Christ of Latter Day Saints. He and Doreen had four children in Idaho, Pamela June, Billy Carl Jr., James Alan, and David Leon. In 1957 Billy joined the U.S. Army. He was shipped and served in Korea for 13 months. When he returned to the states he and his family were stationed in Milwaukee, Wisconsin. He served as a clerk typist until his honorable discharge in 1960. Billy took his family to the Salt Lake City Temple where they were sealed on September 23, 1960. Billy loved reading and learning. He was always taking classes at the School of Vocational and Adult Education in Milwaukee, Wisconsin. He held down two to three jobs all his life. Billy worked for W. H. Brady Co. as a machine operator from 1962-1967. He also earned his diploma from the National School of Meat Cutting in Toledo, Ohio. He worked as a second job at Gillichs, a German market where he smoked meat, made bratwurst sausage, skinned rabbits and cut meat. He also at this time did janitorial work with his family. While in Wisconsin four more boys were born, Mark Duane, Stephen Blaine, Phillip Tracy and Paul Darren. Billy always had missionaries over to feed them. He loved food and sharing it. In 1967 he moved his family to Kearns, Utah. He worked as a meat cutter at Dels market. In 1969-1976 he worked for the Granite School District. Billy again worked several jobs and attended classes at the BYU Extension College. He worked full time at the U.S. Postal Services from 1970-1992. With his family he had many 3rd shift janitorial jobs. While in Utah he and Doreen had four more girls, Lisa Ann, Melanie LaNae, Michelle LaNeil, and Meleda Hope. After Billy retired he served on school playgrounds, and other service. He served in the Baptistery of the Jordan River Temple for five years before and after his missions. Billy and his wife Doreen served as missionaries for the LDS church in Oklahoma, Oklahoma City Mission and in the Jackson Mississippi Mission. Billy is survived by his wife, Doreen Tresner (Kearns, Utah), his sister Evelyn Adams (Boise, Idaho), and children Pamela Morgan (Dean), Billy Jr., David (Debbie), Mark (Cindee), Steve (Anna), Phillip (Kristen), Paul, Lisa, Melanie, Michelle (Travis), and Meleda (Steve). Billy has 70 grandchildren, 68 great-grandchildren and 10 great, great grandchildren. He was preceded in death by his parents and his brother, his son James Alan, and three grandchildren, Felicity and Galen Mullin, and Chaylea Roberts. The viewing will be held in Kearns… The funeral will be held at the Draper Riverview Stake House, 12100 South 700 West at 12:00 noon on Friday, April 15th, 2016 with a viewing prior to services.

The family of Billy Carl Tresner, Sr created this Life Tributes page to make it easy to share your memories.

Obituary of Billy Carl Tresner Sr.
Surrounded by his family...