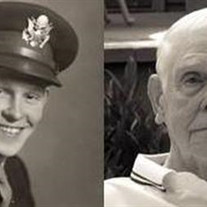 Colonel Bob Dale Glascock, 1923 – 2014, beloved Husband, Father, Grandfather, Great Grandfather, Uncle and Friend. He was a loving and generous person and will be dearly missed. He passed away peacefully on Wednesday, December 3, 2014 with his wife, Yvette and son, James at his side after a long illness. He was born on July 17, 1923, in Harrisburg, Illinois to Leonard and Gertie Glascock. He is preceded in death by his father and mother and his brother Lannie. Bob attended South High School where he excelled in many sports. Bob enlisted into the Army when he turned 18 to serve his country. Bob served in many different army units in the field artillery, spending most of his time during World War II with the 44th Infantry Division as a Forward Reconnaissance and Artillery Observer as a 2nd Lieutenant in the US Army. He fought in the Allied invasion and liberation of France and the invasion of Germany and Austria. He won many battle stars and service medals including the Meritorious Service Medal. He was an exemplary representative and member of the Greatest Generation. After WWII, he met the love of his life of 70 years, Yvette Mirville, in Nice, France. She was a French Citizen working in the US Army Commissary. They were married in the Cathedral of Notre Dame in Nice, France on February 22, 1946 with a full US and French Military Honor Guard. They were married nearly 69 years. Bob retired as a full Colonel in the US Army and served nearly 40 years on Active Duty and in the Utah National Guard and Army Reserve. Bob served in the Korean War, Cold War and during the Vietnam War. He worked for over 30 years for Utah Power and Light as a Senior Customer Service Representative. Bob was an avid Utah Utes supporter. He enjoyed swimming, golf and reading. He is survived by his wife, Yvette Glascock, daughter, Andrea Metos (Allan), son, James Glascock (Sandra), 3 beautiful granddaughters, Erin Glascock Moriarty (Mike), Olivia Glascock, and Dr. Merik Metos. Bob also adored his two wonderful great grandchildren, Conor and Mackenzie Moriarty (Erin). The family wishes to thank Alpine Health Care and Harmony Hospice Health Care for his care for the last 12 months of his life. We would like to thank Melissa Fryar RN and Tracey Benson RN for their medical help, Robin Walker CNA, who become a dear friend to Yvette, and Karen Bowen, longtime housekeeper. Everyone helping Bob came to love and respect Bob and Yvette dearly. In-lieu-of flowers, the family suggests a contribution to Wounded Warriors or a military charity benefitting those protecting our nation, as Bob did his whole life. A small service celebrating Bob’s life will be held at a later date.

Colonel Bob Dale Glascock, 1923 &#8211; 2014, beloved Husband, Father, Grandfather, Great Grandfather, Uncle and Friend. He was a loving and generous person and will be dearly missed. He passed away peacefully on Wednesday, December 3, 2014... View Obituary & Service Information

The family of Colonel Bob Dale Glascock created this Life Tributes page to make it easy to share your memories.