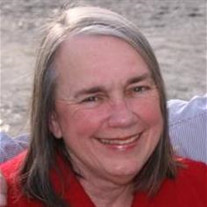 Bobbie A. Jacobson 1953 - 2019 Bobbie A. Jacobson, Farmington, Utah, left this mortal existence on January 4, 2019, at the age of 65, after a valiant struggle with numerous health issues. Bobbie was born on June 3, 1953, in Paducah, McCracken County, KY, to Robert Rayburn and JoAnn (Ingram) Fuller, and was the oldest of their three children. She enjoyed growing up in the south and attended the local schools in Paducah. Her greatest joy was spending time with family and, in particular, her grandmother, affectionately known to the family as Mama Carrie. After graduating from high school, Bobbie attended Brigham Young University where she earned a degree in Home Economics Education. The day after her graduation she married her one and only, Robert W. Jacobson, in the Provo LDS Temple. Their union was blessed with three wonderful children, Carrie Ann, James Frederick, and Bryan Gustaf. Life for Bobbie centered in providing a positive home environment for her children that emphasized gospel instruction, education and making a happy home. Bobbie loved making her own clothes, including her wedding dress. Bobbie’s activities extended to service at church where she served as president at one time or another of the Relief Society, Young Women and Primary. She loved serving and devoting her time to helping others. As a ward Scout Committee Member she was instrumental in helping several young men attain the rank of Eagle Scout. She provided valuable assistance and motivation that pushed a number of young men over the top that might not have made it otherwise. Bobbie and Bob were also blessed to have three other children come into their lives that have meant a great deal to them over the years. Ashley Priest, Amber Fuller and Roger Fuller, Jr. have, indeed, been like children to the Jacobson’s. Bobbie dearly loved them just as her own children. Later in life, Bobbie began suffering debilitating strokes, and eventually, End Stage Renal Disease. Despite her illnesses, she remained active and loved to travel to Disneyland and to see her grandchildren. Throughout her challenges she remained positive and optimistic. If she was ever discouraged, she hid it well. She and her husband made temple attendance a priority until she suffered her final illness. Bobbie is survived by her husband, Bob, her children, Carrie Ann, James Frederick (Christie), Bryan Gustaf (Carolyn), and her eleven grandchildren: Elizabeth Anne, Joshua James, Abigail Kathleen, Audrianna Olivia, Lillian Kjerstin, Bennett Gustaf, Caitlin Christie, Luke Henry, Evelyn Jean, Benjamin Ezra and Mack Wayne. She is also survived by her mother, JoAnn Fuller, and her sister, Teressa Gail Fuller, and her brother, Roger Rite Fuller, Sr., her nieces, Ashley Priest, Amber Fuller, and her nephew, Roger R. Fuller, Jr. She was preceded in death by her father, Robert Rayburn Fuller, and her grandparents, Wallace and Clara Ingram. A funeral service will take place 11:00 am, Saturday, January 12, 2019, at the Farmington Crossing Chapel of The Church of Jesus Christ of Latter-day Saints, at 980 N. Shepard Church Drive, Farmington, UT with a viewing prior to services from 9:45 a.m. to10:45 a.m. Interment will be at the Farmington City Cemetery, Farmington, UT.

Bobbie A. Jacobson 1953 - 2019 Bobbie A. Jacobson, Farmington, Utah, left this mortal existence on January 4, 2019, at the age of 65, after a valiant struggle with numerous health issues. Bobbie was born on June 3, 1953, in Paducah, McCracken... View Obituary & Service Information

The family of Bobbie Ann Fuller Jacobson created this Life Tributes page to make it easy to share your memories.