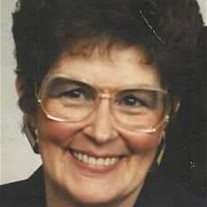 Bonnie Jean Ball Anderson was born August 2, 1931, to Alfred Parker and Jeanette Price Ball. She returned to the loving arms of her Savior, Jesus Christ, whom she loved, on Thursday, October 25, 2018. She looked forward to finally being reunited with her husband. Mom grew up in Sugar House and graduated from Granite High School, where she had made many life-long friends. Because of her talent, she was called upon to sing at various community functions around Salt Lake City, including the Governor's Ball. Mom had many gifts, including wisdom, power of discernment, optimism and faith. She married J. Warren Anderson on November 14, 1953. Their marriage was later solemnized in the Salt Lake Temple. Together they raised six children in Woods Cross. She felt motherhood to be her most important and favorite calling and considered it a sacred trust. It was always important for her that each day was full of purpose and service for others. Mom and Dad served two missions together. They were called to serve in the England, Leeds and Washington D.C. Temple Missions. She shared with fondness, many stories of the people and experiences they enjoyed while serving. They also served many years in the Bountiful, Utah Temple. Mom often expressed her love for the Savior and her family. We knew she had a sure testimony of the Plan of Salvation and expects "No Empty Chairs" in our family circle. She is survived by her children, Mera Lee Roman (Tony), Mari Lynn Cook (Bob), Michael W. Anderson (Lois), and Mar Gene Anderson, along with 11 grandchildren and 15 great-grandchildren. She was preceded in death by her parents, her husband, Peggy Jackson and Marilyn Fullmer, (sisters), Mark Anderson (son), Mello Dee Anderson (daughter), and Chandler Roman (grandson). Funeral services will be held Monday, November 5, 2018 at 11:00 a.m. at the Woods Cross Stake Center. (2064 S. 800 W., Woods Cross, UT) Friends may call on Sunday, November 4, 2018 from 6 to 8 p.m. at the same location and on Monday, prior to the services, from 10:00 to 10:45 a.m. Interment at Memorial Lakeview Cemetery in Bountiful, UT.

Bonnie Jean Ball Anderson was born August 2, 1931, to Alfred Parker and Jeanette Price Ball. She returned to the loving arms of her Savior, Jesus Christ, whom she loved, on Thursday, October 25, 2018. She looked forward to finally being reunited... View Obituary & Service Information

The family of Bonnie Jean Anderson created this Life Tributes page to make it easy to share your memories.