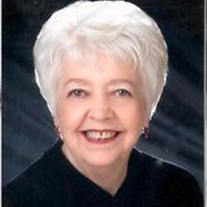 Bonnie Lou Lott Phillips Blaylock, 89, passed away peacefully February 9th 2013. She was born on January 2, 1924 in Ucon, Idaho to John Taylor Lott and Mary Hawkins. She married the love of her life and next door neighbor Joseph Edward Phillips October 2, 1946 in the Idaho Falls Temple. Their children are (Ray) Sandra Layne and Joseph Craig (Patti) Phillips. She has seven grandchildren and seventeen great grandchildren. Joe was killed in a tragic accident in Arizona five years after they were married. Eight years after his death she married Robert M. Blaylock on December 2, 1960. She was preceded in death by her parents and a brother Ray Hawkins Lott. She is also survived by her brothers, Jack Lott, Richard (Ernestine) Lott and Spencer (Mary Ette) Lott and her sisters (Don) and Mary Hill and (Todd) and Carolyn Haungs. Bonnie was an active member of the Church of Jesus Christ of Latter Day Saints. She had a deep and abiding faith in our Heavenly Father, Savior and the Scriptures. She served as an Organist, Primary Teacher, Librarian, and Relief Society teacher, Visiting Teacher and Visiting Teaching Coordinator. Bonnie was raised on a farm in Ucon, Idaho where she was taught the values of hard work, keeping your word, the importance of paying tithing and a love for family. She taught these values to her children and grandchildren by her example. She loved life and at the center of her life was her family. She was an excellent homemaker. She kept a beautiful and immaculate home. Her cooking skills were unsurpassed much to the delight of her family. No one made better bread, cinnamon rolls, pies and hand dipped chocolates. She enjoyed cooking for her family. She put a lot of love in preparing meals for Sunday dinners, birthdays and Holidays. She was a skilled seamstress and created countless articles of clothing and treasured heirloom needlework pieces. She was passionate about music and encouraged her family to develop their talents. She played the piano beautifully. She had a fondness for learning new things and reading. She was an Idaho girl and looked forward to summers at her home on the Snake River in Swan Valley amongst her brothers and sisters whom she adored. They spent their days visiting, canning and planning family get-togethers. One summer was spent writing a Family Cookbook to preserve their Mothers and Grandmothers recipes. The “Family Cookbook” is a treasure. She was proud of her heritage and made a valiant effort to further the cause of her family history records. She has been an outstanding example of loving as our Savior does. Her legacy is one of service, charity and love. We want to thank all those who cared for our Mother in her last hours. There will be a viewing at the Grandview 9th ward 1555 N. 1350 W. Provo, UT Thursday February 14, 2013 from 6:00 pm – 7:00 pm Funeral services will be held at 12:00 noon on Saturday, February 16, 2013 at the Monument Ward 10854 N. 41 E. Ucon, Idaho. There will be a viewing prior to services at 11:00 am. Interment will be at the Ucon Cemetery.

Bonnie Lou Lott Phillips Blaylock, 89, passed away peacefully February 9th 2013. She was born on January 2, 1924 in Ucon, Idaho to John Taylor Lott and Mary Hawkins. She married the love of her life and next door neighbor Joseph Edward Phillips... View Obituary & Service Information

The family of Bonnie Lou Blaylock created this Life Tributes page to make it easy to share your memories.