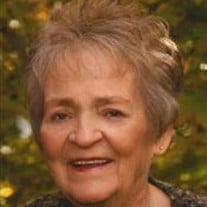 Bonnie Jean Higham Shurley passed away peacefully of natural causes in the presence of her children and grandchildren, Saturday, May 11. She was 81. Known for her kindness, patience, and generosity, Bonnie was born July 31, 1931, in Mar Vista, CA, during the height of the Depression. She was the sixth of seven children born to Uriel and Arvilla Higham. Although the family was poor and often struggled financially, Bonnie developed an optimistic and self-sufficient spirit that guided and helped her throughout her life. She also was known for her excellent baking and sewing skills, which she used to bless the lives of friends and family. Her children recall receiving home-sewn Christmas and Easter dresses, as well as Christmas pajamas, made lovingly by their mother each year. She would spend most Christmases baking, making sure that plates of goodies were always delivered to neighbors and ward members. She learned to be self-sufficient at an early age after her mother passed away when Bonnie was only 14 years old. Bonnie took over many of the mothering roles in her home, helping to care for her younger sister. Bonnie grew up in Southern California, attending Beverly Hills HS and then graduating from Belmont HS in 1949. She went to BYU for a year. She came home for the summer to a new ward and immediately the caught of the eye of Robert Ira Shurley. He asked her out, and they were married four months later, November 14, 1950, in the St. George LDS Temple. Her independent spirit, developed as a child and teenager, would continue to serve her well. Bonnie and her new husband would spend most of the first 14 months of their married life apart, while Robert reported for active military duty, first at Fort Ord, CA, and then in Korea. Following Robert’s military duty, the couple remained in California for several more years, where they had their first two children, Robert, Jr. and Susan. In 1958, they moved to Coltman, Idaho (near Idaho Falls) and were blessed with three more children, Lori, Julie, Jill. Bonnie continued in her role as homemaker until 1975, when her husband became disabled and was no longer able to work. In her new role as breadwinner, she worked in a health foods store and in The Rose Shop, an Idaho Falls florist. After retiring, she and her husband served a service mission in the LDS Employment Office in Salt Lake City. Bonnie spoke frequently of this experience, often referring to it as “the highlight of our retirement years.” In 2003 Bonnie began having health problems, and after much deliberation, she and her husband moved to Pleasant Grove, Utah, where they lived in a beautiful apartment in the basement of their daughter Jill’s home. Bonnie is survived by her brother Del Higham, of Canton, CT, and a sister, Zoeann Graham, of Orlando, FL. She also is survived by her children, Robert Jr. (Brenda), of Idaho Falls, Susan Stewart (Larry), of Challis, ID, Lori Weber (Tim), of Boise, Julie Johnson (Bruce), of Idaho Falls, and Jill Skousen (Richard), of Pleasant Grove, 16 grandchildren, and 12 great-grandchildren. Funeral services will be held Friday, May 17 at 11 a.m. at the Grove Creek 5th Ward chapel, of the Church of Jesus Christ of Latter-Day Saints, located at the corner of 700 East and 500 North, Pleasant Grove, Utah. A viewing for family and friends will be held from 9-10:30 a.m. at the church prior to the start of the funeral. A graveside service will be held on Saturday, May 18, at 11 a.m. in the Grant-Central Cemetery, Rigby, Idaho. At the conclusion, family members invite friends to join them at the Coltman 2nd ward building to visit and reminisce. The family would like to express its gratitude and appreciation to the Hearts for Hospice staff, of American Fork, in particular to Caci, Lexi, and Mary Ann, who cared lovingly for our mother. In lieu of flowers, friends may consider sending contributions to the Missionary Fund of the Church of Jesus Christ of Latter-day Saints.

Bonnie Jean Higham Shurley passed away peacefully of natural causes in the presence of her children and grandchildren, Saturday, May 11. She was 81. Known for her kindness, patience, and generosity, Bonnie was born July 31, 1931, in Mar... View Obituary & Service Information

The family of Bonnie Jean Shurley created this Life Tributes page to make it easy to share your memories.