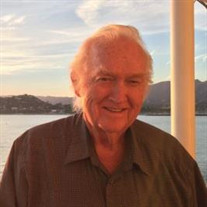 Boyce Richard Sorensen was born in Spring City, Utah on November 18th, 1940. Our dad was a world traveler and made his final destination on Monday, February 3, 2020. At 79 years old “he had a good life”. He was one of the good guys. He was a hard worker that provided for his family and taught us many lessons. At a young age he was a trapper and a hunter, not just for sport, but to help provide for his family. At 17 he became the man of the house after his father passed away. He took that responsibility seriously. He left the farm and found a career at Kennecott that lasted him 32 years, he would send money home to care for his mother and two younger sisters. He wooed the love of his life, our mom, Barbara Jean Skelton in 1961 with his ‘58 Chevy Impala Convertible on a blind date. They were soon inseparable (after he bought her that Janzton sweater). They were sealed for time and all eternity on March 9th, 1962 and became not just partners in marriage but partners in life. Our father & mother had similar ideals and goals in life. After serving two service missions locally, they were called on a mission for the Church of Jesus Christ of Latter-Day Saints to Nauvoo in 2016. This and their dedicated temple work not only brought them closer to each other but closer to their Heavenly Father. Our dad loved many hobbies, but mostly because those hobbies brought him closer to his family. Our parents caught the travel bug early in their marriage, the amount of miles they would put on a car would floor you. From sea to sea, we have driven it, sometimes with the whole family, sometimes just the two of them, and sometimes with the wrong gas. We had weekly game nights, and for years participated in many bowling leagues and tournaments. He gained many friends and loved ones from the Sportsman League at Delton Bowling Lanes where he was secretary, he enjoyed that title very much. His highlight was when his team won the city-wide tournament, and when his two sons scored 300’s. Our dad was a smart man, one of his biggest loves was teaching his kids about the bulls and the bears, he provided lessons from a young age to the very end. He wanted to set his kids up for success and most of all to provide them what he was not afforded. He had many hidden talents, many that his kids never knew, and only learned about over the past few days. He was a devoted husband and a kind father. That was his goal in life. He taught us many lessons but mostly how to love unconditionally. Preceded in death by his Parents, Peter Richard Sorensen and Madge Christensen. He is survived by his wife Barbara Jean Skelton Sorensen, his children Sheila Chubak (Robin), Marty Sorensen (Melissa), Cherie Sorensen, Natalie Parkin (Josh), Chad Sorensen (Melissa), and his 18 Grandchildren and 4 Great Grand Children, his sisters Ireita Nielson and Colleen Jolley. Viewing will be held on Friday, February 7th 6-8 PM, Saturday February 8th 9-10, Funeral starts at 10 AM. All services will be held at their church, 4310 South 3200 West, West Valley City, Utah 84119

The family of Boyce Richard Sorensen created this Life Tributes page to make it easy to share your memories.