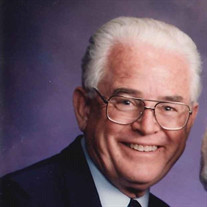 Boyd Miller Fullmer 1925 - 2017 Boyd Miller Fullmer passed away on August 18, 2017 at the age of 91 after a short illness. He was born on September 22, 1925 in Panguitch, Utah, the fifth of eight children to Arvil E. Fullmer and Maud Miller. He married Florence Inkley on June 21, 1951 in the Salt Lake Temple. They were married for over 66 years. They are the parents of five children, Mark (Greg), Doug (Bonnie), James (Gwynne), Susan, and Joseph (Mya). He grew up in Sugarhouse, Utah, graduating from South High School in 1943. He worked with his dad and brothers to build the family home on 1900 East and 2100 South. He served in the U.S. Army in World War II as a member of the Army Corp of Engineers. Upon returning from the military he studied at the Univers¬¬¬ity of Utah graduating in political science and law. He practiced law in the Salt Lake area for over 35 years. Upon retirement from law he spent 23 years working for a dear family friend, Jared Fairbanks in the mortuary business. He loved the mountains, fishing, hunting, traveling and being with family. He was always active in the LDS church fulfilling many callings in the Elder’s and High Priest quorums and in the Sunday School presidency. Following his retirement from law, he was a service missionary at Welfare Square for several years providing legal advice to those in need. He served with his wife in the Salt Lake Temple and in the branch presidency of Holladay Health Care. He loved singing in the choir. He will be remembered by family and friends as a humble, kind and generous man who was quick to forgive and willing to help however he could. He is preceded in death by his parents, his brothers Jay, Keith, Ferrol, Ron and sister Maureen. He is survived by his wife, Florence, his five children, and sisters Vonna (Bonnie) and Fay Rita. He has 11 grandchildren and three great grandchildren. His grandchildren loved all his stories and jokes. Funeral services will be 12:00 Noon, Friday, August 25, 2017 at the Holladay 18th Ward, 2625 East Milo Way, Holladay, UT with a viewing prior to services from 10:00 to 11:30 am. Interment at Wasatch Lawn Memorial Park. The family would like to thank the caregivers at Intermountain Medical Center and St. Joseph’s Villa for the compassionate care of our husband and father.

Boyd Miller Fullmer 1925 - 2017 Boyd Miller Fullmer passed away on August 18, 2017 at the age of 91 after a short illness. He was born on September 22, 1925 in Panguitch, Utah, the fifth of eight children to Arvil E. Fullmer and Maud Miller.... View Obituary & Service Information

The family of Boyd Miller Fullmer created this Life Tributes page to make it easy to share your memories.