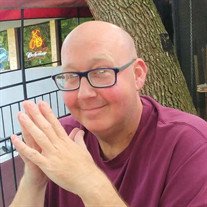 Our beloved brother, uncle, son, partner, nephew, and dear friend to hundreds passed away unexpectedly on June 30, 2021—just a few weeks after his 49th birthday. Brad was born on the afternoon of June 14, 1972, to David and Mary Mullen of Roy, Utah, at the original St. Benedicts Hospital in Salt Lake City. David and Mary had a baby boy named Evan in 1971, who tragically passed away two days after birth. When Brad was born the next year, their joy and pride was boundless. Brad grew up in Roy, where he made many life‐long friends who he continued to keep in touch with, most recently getting together just last year. He graduated from Roy High School in 1990 and then started college at Weber State University for several quarters. Brad had an insatiable passion for music at a very early age and would spend hours listening to the radio, sometimes all day and all night, to win prizes and create relationships with the DJs. While in college, he worked at Weber State University's college station, KWCR (88.1) Wildcat radio. During this time, he also worked an overnight shift for a convenience store in Roy called Country Cousins. He would call into KJQ (a very popular radio station at the time) in the middle of the night, and eventually convinced the overnight DJ, Dom Casual, to do a nightly "check in" with him. The segment was called "Cuzzin Brad's Country Store Chat." From there, Brad's unique, quirky, and hilarious sense of humor helped him get his foot into the radio industry. Of course, this was only after he sent KJQ's program director Mike Summers his first and only demo tape and then subsequently pestered Mike enough until he gave him a shot on the overnight show. It is also where Brad’s unique DJ name was born, Cuzzin Brad. For the next 30 years, Brad honed his DJ skills and became a true radio professional with a flawless delivery, a charming wit and impeccable timing, and a photographic memory for all things music, bands, movies, singers, and pretty much any other pop culture topic you could think of. He worked for many other stations during his career including X96, 101.9 The End, a morning show in Spokane, Washington, and most recently, on The Wave with one of his closest and dearest DJ friends, Chet "The Pinhead" Tapp. Two of Brad's most‐recent and popular radio shows were "Unrest of the 7th Day" airing on Sunday nights and "The Newer New Wave Show" airing on Wednesday evenings. Brad was well‐known in the Utah DJ community and his family appreciates the outpouring of support from many of the DJs that he worked with in the past. In 1998, Brad married Shauna Nanell Gottwald. They shared many happy years in Magna, Utah, and 18 months in Spokane. After almost 20 years of marriage, they decided it was time for them to part ways and separated amicably in 2016. About a year later, Brad met the love of his life, Lisa Westwood. They spent most of their time together for the next several years, right up until his untimely passing. Brad and Lisa made each other so happy and where one was, the other was sure to follow. They had a relationship built on respect, trust, laughter, kindness and many shared moments and memories, including concerts and trips, spending time with mutual friends, going to parties and out to dinner, and celebrating holidays with their families. Many of Brad's family members remarked they had never seen him as happy as he was with Lisa. Lisa felt the same way about Brad and is devastated and heartbroken by his passing. Brad was truly one of the funniest, sweetest, most hilarious, smartest, and wittiest people you could ever meet. His light will never truly dim, as he made such a beautiful and lasting impression on thousands of people during his life. We will miss him dearly. The family would like to thank the radio community for their outpouring of love and support shown over social media, especially from his beloved friend and fellow DJ, Chet Tapp. The family would also like to thank Overstock.com for their support and compassion during this difficult time. Brad was preceded in death by his father, David Lee Mullen; brother Evan Lee Mullen; grandparents Ken and Marjorie Mullen and Lena Pearl Morley Hatch; and his cousin Andrea Jill Mullen. He is survived by his life companion, Lisa Westwood; mother, Mary Mullen; sister, Amy Mullen; and brothers Eric (Brooke) Mullen and Andrew (Dallice) Mullen; along with seven nieces and nephews: Josh, Korie, Hank, Gracie, Wynn, Zoie, and Maggie. Funeral services and viewing will be held Friday, July 9, at the Premier Funeral Home (67 East 8000 South, Sandy, Utah). Viewing from 10:30 a.m. to 11:45 a.m. Funeral service will start at Noon. Interment at Larkin Sunset Gardens Sandy. Due to limited space, the services will be exclusively for family and close friends. We ask that you wear a mask if you are not fully vaccinated. The family would like to thank the thousands of radio fans who have expressed love, support, and condolences over social media and online over the past several days. A separate event to honor Brad is being organized by The Wave and details on this will be released to the public when available. Brad's obituary and condolences can be viewed by visiting www.premierfuneral.com. We express our heartfelt thanks to the Draper police, fire and rescue teams and the representatives from the medical examiner's office for their compassionate and kind handling of Brad's passing.

Our beloved brother, uncle, son, partner, nephew, and dear friend to hundreds passed away unexpectedly on June 30, 2021&#8212;just a few weeks after his 49th birthday. Brad was born on the afternoon of June 14, 1972, to David and Mary Mullen... View Obituary & Service Information

The family of Brad Lee Mullen created this Life Tributes page to make it easy to share your memories.