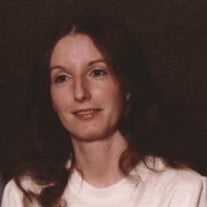 Brenda Jean Barry Jan 17, 1957 – Feb 22, 2020 Born to LaRae King and Joseph Leslie Hill. Had a childhood that she absolutely adored. Only jokingly complaining of the Saturday morning wakeup call of the vacuum coming through the door for cleaning time. She often spoke of how much she loved the simple things her parents did to make family time fun and memorable, small and simple, like packing sandwiches and going to a park a bit farther from where they lived and spending time there for a picnic and play. She has always had a deep adoring love for her parents to no end. I believe she enjoyed teasing her oldest sister Sharon most, her younger siblings, Stephen and Kristine, were a bit luckier but not completely unscathed. Her personality was full of wit and mischievous fun, always wanting to laugh, and sometimes at the expense of others; like when playing Old Maid with me, holding the old maid card higher than the others so that I would choose that card and lose. Funny mom, funny mom. Under the jokester side, was a caring person who had a big love of animals especially cats, regardless of her severe allergy to them. She would help anyone that needed her no matter the consequence and loved her family so much that if you messed with them you better watch out, from a June bug flying towards her baby to the Lady at the Layton Mall parking lot, it did not matter. As her brother Stephen states: “Brenda had and we’re sure she still does, obtained a quick and humorous wit about her. Conversations were always enjoyable and fun. No matter what life’s circumstances held at any present moment, Brenda thought of others. She taught everyone around her the condition of love, and through that example, she taught others. If only we all could learn from this natural gift from God that she obtained and practiced daily, this world would be a more beautiful playground.” Her determination, humor, love of family, and quick wit would get her through some of the most trying times in life. She married young and became a mother only to soon divorce and become a single mother. Determined to better our life she would apply at Hill Air Force Base where she would flawlessly excel to a GS-10, of course this was all without graduating high school. She completed her GED and was promoted to a GS-11 as a Program Analyst. During those years she did marry again and have two more children, Braden and Mitchell. Braden had a terminal disease which posed a lot of challenges for everyone. The marriage dissolved after many years but they remained in close contact and on good terms. Braden succumbed to his disease at the young age of 17 and proved later to be more difficult for her than she thought. She persevered and we are so ever grateful she did. Her son Mitchell states: “She had more will power than any other family member I knew for the majority of my youth. Strong character from her parents is plain to see and a funny generous human being. She was hard to argue against and as stubborn as an adamant rock. Yet a trait of forgiveness seemed always strived for also well looked forward to. After over 17 years is reunited with her son, my brother, Timothy Braden Douglas.” Through these later years, she has been through so many medical procedures, surgeries, and illnesses, that each time a new doctor came across her medical record they were amazed. Most learning what a stubborn girl she is when breaking out of the hospital. I of course being the get-a-way driver (cause ya just don’t argue with her). This time was no different, she again wanted to break out, but her little body could no longer fight. She herself would argue with the doctor….but her body could not. She is preceded in death by her son Braden Douglas, father Joseph Leslie Hill, great grandson Tobias Kai, sister Sharon Letchenberg, brother Gayle, many uncles, and aunts. She leaves behind her mother LaRae Hill, daughter Danyel Ewing, son Mitchell (Holly) Douglas, brother Stephen (Linda) Hill, sister Kristine (Larry) Ward, grandchildren Dylan (great grandkids Deion, Briggs), Selena (Franse) (great grandkids Davina, Zakiya), Dezmond, Joseph (Jesse) (great grandkids Adrianna, Elora), many nephews and nieces, many cousins and aunt Wanda who currently is 102. I will forever have a void in my life, for a mother and friend that I need, love, was sometimes mad at, and sometimes did not like growing up, but I learned so much from her. If it were not for her, I would not be part of the person or the mother I am today and I am so grateful to her for that. It does comfort me to know she is with her dad, son, and my grandson (her great grandson). A celebration of life will be held Saturday March 7th from 3 p.m. to 5 p.m. for family and very close friends. You can contact Danyel for more information.

Brenda Jean Barry Jan 17, 1957 &#8211; Feb 22, 2020 Born to LaRae King and Joseph Leslie Hill. Had a childhood that she absolutely adored. Only jokingly complaining of the Saturday morning wakeup call of the vacuum coming through the door... View Obituary & Service Information

The family of Brenda Jean Barry created this Life Tributes page to make it easy to share your memories.