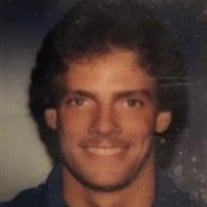 Brent Leland Metcalf passed away on March24, 2022 after many years of health challenges. He was born on March 24, 1965 in Salt Lake City, Utah to Jack and Brenda Metcalf. He is survived by his parents and the following siblings: Julie Watkins (Ron), Jackie Hailes (Phil), Brian Metcalf, Mark (Paula), Jeff (Monica), and Deanne Ericksen (Rick) and many cousins, nephews, nieces, uncles and aunts. Brent was born profoundly deaf. His parents each carried a recessive gene for deafness which causes a 25% chance of having a deaf child. His sister Deanne was also born profoundly deaf. Brent attended schools under the direction of the Utah School for the deaf and blind, during which time he attended school for one year as a resident in Ogden at the school for the deaf and blind. He graduated from East High School. He worked one summer in Hawaii as a teenager in the pineapple fields picking pineapples. He returned home at the end of the summer with a deep tan and sun-bleached hair. He also worked as an adult at Beehive Clothing (Church of Jesus Christ of Latter-day Saints) and worked as a draftsman at the U. S. Forest Service. He has since been on SSD (Social Security Disability) for many years. He never married during his life but was in love with a woman (Renae) before her passing away many years ago. He never forgot her and spoke of her often. Brent endured a lot of physical pain during his later years due to his numerous health challenges and multiple surgeries. As a result of throat cancer, he was treated with chemo and radiation which caused him to lose all of his teeth. He wasn’t able to eat food after the cancer and existed by drinking health drinks the past several years. He also had both hips replaced and suffered from a perforated colon which nearly ended his life before he received emergency surgery to remove part of his colon. Brent had a stubborn streak from the time he was a little boy that never ended, but he was a gentle soul who was very loving and thoughtful. We can only imagine the reunion which has taken place with loving family members who have passed beyond the veil and the ability he now has to hear and speak with them. We feel that he is now at peace with that knowledge he now has, knowing that life continues after death.

Brent Leland Metcalf passed away on March24, 2022 after many years of health challenges. He was born on March 24, 1965 in Salt Lake City, Utah to Jack and Brenda Metcalf. He is survived by his parents and the following siblings: Julie Watkins... View Obituary & Service Information

The family of Brent Leland Metcalf created this Life Tributes page to make it easy to share your memories.