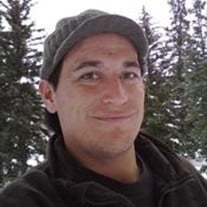 Our beloved Brent Edward O’Dell peacefully started his new journey on July 30th, 2013 while surrounded by family and friends. Brent was born on June 23rd, 1975 in Rehoboth, New Mexico but spent most of his life in Orem, Utah. He is from the Tachinii’ Clan, born for the Scottish Irish people. He was loved by many, and had countless best friends. As his mother’s only son, he had a deep appreciation of the importance of family and friends. Brent was born with a sense of humor matched only by his sense of adventure. As a child, he would spend time with his cousin Kim, riding Big Wheels, and selling lemonade. He would join Kim and her friends when they were playing with Barbies, but he was never without his Indiana Jones doll. Brent’s cousin, Kevin “Moonie” looked up to him as a big brother. They did everything together including skiing, rollerblading, and going to movies. Brent’s nephew and Little Buddy for Life, Atticus, was extremely important to him-- Brent would light up whenever he was around. Brent had endless stories from his childhood, and would always talk about his Aunt Bessie, his cousin Wayne, and his many other family members that lived on the Navajo Reservation. He had so many fond memories there and would always tell fun stories. Brent attended Mountain View High School and Salt Lake Community College. His favorite jobs were catering, resort work in Park City, Deer Valley, the Canyons, and Snowbird, and working as an EMT. His favorite subjects were Biology, Science, Human Anatomy, and History. Throughout his life, he learned many skills. He liked to sing and played the saxophone and loved Jazz. He played in a jazz quartet in high school. He was a talented chef and could make incredible dishes that wowed friends and guests. He would put a personal touch on everything he cooked, insisting the dishes be made his way. Brent was a serious roller-blader back in the day. He had an encyclopedic knowledge of history, movies, music, and trivia. He loved the Indiana Jones, Die Hard, and James Bond series—Harrison Ford and Bruce Willis were among his favorite actors. He spent as much time as he could in the outdoors, disc golfing, camping, rock climbing, fishing, mountain biking, barbecuing, going for scenic drives, and photographing nature. Brent loved animals, primarily bald eagles, moose, deer, elk, birds, dogs, cats, etc. When talking to animals, he would always say “Big Sweetie” in his doggie voice. We always talked about having dogs and how much fun it would be. He spent many hours at the Humane Society of Salt Lake walking dogs and giving them some love and attention. He even brought one home for Christmas once and had the hardest time taking sweet Summer back. Even Summer didn’t want to leave him and buried herself in the back of the car when they got back to the Humane Society. He cried because he so heartbroken and wanted to keep her. He went one week later and she was already adopted into a wonderful family. He found comfort to know that she didn’t have to be locked up in the kennel for long. Brent was a compassionate, big-hearted guy who lived life on his own terms. He was an unselfish soul with a welcoming, easy manner. Brent loved getting a reaction out of people. When driving down the street, he would yell at pedestrians to just to startle them; the bigger the reaction, the bigger the thrill. He had a very loud voice and loved to catch anyone off guard. Even when he was in the hospital, he enjoyed startling the nurses when they came into his room. They all loved him and his fun-loving and positive outlook on life. Brent met the love of his life, Janna, in Deer Valley in 1996. After a few years of knowing each other, they started dating, and from then on, they were inseparable. Their favorite places to vacation were Moab, Goblin Valley, the Manti La-Sal Forest, the Uinta’s, and anyplace deep in the mountains. They would often head to the mountains without a plan and would discover the most amazing places. They would camp together and would always try to leave the place in better condition than when they arrived. Brent loved to use his machete and his axe, assaulting dead trees for firewood, and getting in some target practice with his bb-gun. Brent considered Bald Eagles a good omen—it was always a good sign when he and Janna would see one on their way to Park City. It was even better if they were able to see Moose or other wild animals on the way. He always had a good eye to spot them out and could clearly identify them from great distances. We will always remember Brent O’Dell. He was a wonderful man and a gift to us all. He left so many memories and stories behind with so many people. He had a way of bringing a smile to your face. He was goofy and sometimes a dork, just to get a laugh. He loved his soul mate, Janna, so much and wanted her to always remember him and the many good times they had together. He died on her birthday so that she would never forget him and how much he loved her. He is survived by his sweetheart Janna Llewelyn, his mother Evelynn O’Dell, his aunt Carlene, his cousins, Kimberly and Kevin, and his “Little Buddy” Atticus Maximus, named after the Great Brentis Maximus. Funeral Services will be on Saturday, August 3rd at 11 am at the Suncrest 5th Ward, 140 North 400 West, Orem, Utah. Family and friends may call at the church Friday, August 2, 2013 from 6:00pm to 8:00 pm and on Saturday, August 3 from 10-10:45 am prior to the service. Interment at Orem City Cemetery, 1520 N. 800 E. Orem, Utah. In lieu of flowers, donations may be made at any Zion’s Bank under Brent O’Dell Donation.

Our beloved Brent Edward O&#8217;Dell peacefully started his new journey on July 30th, 2013 while surrounded by family and friends. Brent was born on June 23rd, 1975 in Rehoboth, New Mexico but spent most of his life in Orem, Utah. He is from... View Obituary & Service Information

The family of Brent Edward O'Dell created this Life Tributes page to make it easy to share your memories.