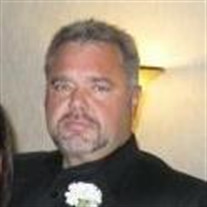 On August 16, 2017, Bret’s pain and suffering finally ended and he left this plane of existence. Bret was born June 29, 1958 to DeWayne Grant Merrill and Sheila Faye Bernard Merrill. He married Dorothy Eileen Sellers on August 26, 1978. They had 2 children, Melissa Dawn Merrill on August 25, 1979 and Cody Blake Merrill on July 25, 1982. Bret was always known as a hard worker and a “get it done” kind of guy. His work ethic was something you don’t see much of anymore. He also expected those around him to work just as hard as he did and he did earn his “Superintendent” Title as he took great pride in everything he did. He built a beautiful log home in Oakley, Utah and remodeled his home several times with the help of family and great friends. He was a very loving and generous man who loved to cook and entertain friends and family. He was a self-taught cook and was very good at it. Bret worked in construction his whole life and then owned and operated his own Demolition, Snow Removal and Landscaping business. He loved to fish and camp. In November, 2012 he was diagnosed with Multiple Myeloma Cancer after dealing with severe pain in his back for several years and just trying to “tough it out”. He fought this disease and the effects of his body breaking down on him with all of his strength and will but it took a very big toll on him. He was a very proud and independent man and it was very difficult for him to have to ask for help or rely on others to do things for him as this was not his style at all. In the end, he just wanted everyone to know that he loved them and that he was sorry. His departure is a shock to family and friends and while we are very sad to lose him and will miss him more than he could ever know, we are happy that he is not in pain anymore. He was a “MERRILL” til the end. Bret is survived by his wife Dorothy Merrill, daughter Melissa Dawn Merrill, son Cody Blake Merrill (Erin), brother Blake Grant Merrill, brother in law Rodney Sellers (Sherry) and many nieces, nephews, aunts, uncles and cousins. Those of you who were special to Bret know who you are and know that he loved you dearly. A private family memorial will be held on Monday, August 28th, 2017.

The family of Bret DeWayne Merrill created this Life Tributes page to make it easy to share your memories.