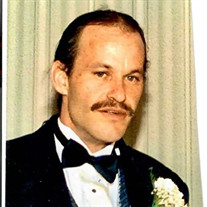 Brian Carver was born January 1st, 1968, a new year’s baby and passed away Oct. 18th, 2021 of a heart attack. Brian was always happy, he was known as a care giver to many friends who needed help. He would pay bills for them when their heat was going to be turned off. He drove friends wherever they needed to go. He helped a girl get her sight back. He helped a lady who fell on the cement curb and hit her head bad and was bleeding. There were so many times he helped people I cannot list them all. He was very proud to be a member of American Legion Post 112 motorcycle club. They all rode to collect money for our Veterans, Brian rode at the front of the motorcycle line, with Chad Huffman, Sargent at Arm’s He also loved flying remote control airplanes with his Brother Curtis Jurgen who later died of a Brain Tumor. He could put together anything and worked on cars. He did also love sailing remote control boats on the lake. Brian loved swimming and could do flips off the diving board. In the winter he skied like the wind. He helps his mother who lost her husband, Rick, a year ago and never said no to anything she wanted him to do. In his early years he attended a boarding school in Arizona called Oak Creek Ranch near Sedona. There he learned lots of things. He learned how to ride a horse, take care of it and ride horses. The school also took the students to a square dance club in cottonwood. It was called “The Road Runners”. Brian had a cute partner and graduated from the class with honors. He learned all the mainstream calls and could dance in any club in the world. Brian also took 1st place in bowling and was given a trophy with his name on it. Brian in his life had many good friends and lots of girlfriends. Brian is survived by his Mother Gay Tonnesen Hier, his brother in law Dr. Kevin Underwood, his adopted daughter Melissa Carver, son Sheldon Wellman, step father Keith Johnson and 3 cousins, Sarah and Samantha Underwood, Barbara Stromness. Those that went before him were his sister, Catherine Carver Underwood, his Brother Curtis S. Jurgen, his uncle Bud H. Tonnesen, his father Guenter Schleusener, a step father, William A Carver and a step father Rick Dean Hier, who loved Brian very much. We are all going to miss his great friendly style. Gay, Brian’s Mother wants everyone to be safe and healthy, so it would be good to wear a mask. A get together of Relatives and friends will be held at Wasatch Lawn Memorial Park at 3401 Highland Drive on Saturday, Nov. 6th 1:00 pm in the mausoleum called the Garden of the Lilies.

Brian Carver was born January 1st, 1968, a new year&#8217;s baby and passed away Oct. 18th, 2021 of a heart attack. Brian was always happy, he was known as a care giver to many friends who needed help. He would pay bills for them when their... View Obituary & Service Information

The family of Brian Carver created this Life Tributes page to make it easy to share your memories.