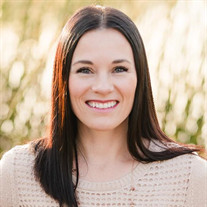 Brittaney Dawn (Bell) Burke, angel daughter, wife, mother, sister, and friend returned home to her Father-in-Heaven after a tragic automobile accident on February 6, 2021 in Gilbert, Arizona. Brittaney was born September 8, 1980 in Tempe, Arizona to Timothy Richard Bell, Sr., and Laurie Jean Wilson-Bell. Brittaney was a sweet, loving child from the beginning. She was so kind and patient with her rambunctious older brother, and she loved and mothered her two younger brothers. Yet, every time she blew out her birthday candles, she wished for a sister. When she was 14-years old, her wish was finally granted and two years later, her second sister was born. She was deeply devoted to her family, including her parents. From a young age, Brittaney loved to play softball. She participated in recreational, fast pitch and high school softball; she played pitcher, catcher, first base and centerfield. During one game when she was pitching, the coach took her out after she had pitched too many balls; she was so irritated at being removed from pitching that she hit a home run when she was next at bat. The outfielders were still chasing the ball when she rounded 3rd and headed for home. It was clear by the time she was 6 years of age that she would have a lovely soprano voice. During her first grade Christmas program, she was the only one that could hit the high notes; her voice rang out clear and beautiful. She attended Jordan High School in Sandy, Utah, where she sang with several choirs, including Acapella and Madrigals. When she tried out for Madrigals, she demonstrated her beautiful voice as well as her deep devotion to her Savior, by singing I Know that My Redeemer Liveth from Handel’s Messiah. Brittaney studied cosmetology in high school and vocal performance in college. The greatest desire of her heart, however, was to be a wife and mother. She married Randall Warren Burke on December 29, 1999 and they were sealed in the Salt Lake Temple on January 20, 2005. Five children were born to them: Adam Michael, Hailey Sophia, Rose Marie, Isaiah Randall, and Shiloh Dawn. A few years later, Brittaney and Randy fostered an infant girl who needed them, and they were blessed to subsequently adopt Scarlett Ann. Brittaney was a devout disciple of Jesus Christ. She was a life-long member of the Church of Jesus Christ of Latter-Day Saints. She served in several capacities in Primary: as the chorister, a teacher, and a leader. She also served in most of her wards as a leader in the Young Women organization. She showed much love and concern for all the girls, especially those who were struggling in their lives and testimonies. Brittaney’s love for her Savior and her great desire to emulate his example showed in the love and kindness she gave to all who knew her. She never said an unkind word to or about anyone. Even when friends were unkind, she never could purposely hurt anyone. She loved her children and husband deeply and was constantly doing kind and loving things for them. In her kitchen there is a sign on the windowsill that reads “If you think my house is full, you should see my heart”. She taught her children the gospel and she and Randy studied it with them every night before retiring to bed. Family was always the most important thing in her life. Brittaney is survived by her husband, her 6 children, her daughter-in-law Skylar, her parents, her brothers Timothy Jr., Ian, and Jonathan (Jennifer) and her sisters Caitlin (Michael Fletcher) and Victoria (Clyde Riboldi), her nephews Myron, Forrest, Shepard and Luca and her nieces Emma, Lily, Lucy, and Samantha. She was preceded in death by her grandparents and an uncle and aunt. Funeral services for Brittaney will be held on February 16, 2021 at the Church of Jesus Christ of Latter-Day Saints Mount Jordan 7th Ward Chapel, 235 East 9800 South in Sandy, Utah. There will be a viewing from 9:00 am to 10:45 am with the service to follow at 11:00 am. Interment will follow immediately at Larkin Sunset Gardens, 1950 East 10600 South in Sandy, Utah. Due to Utah State mandated COVID-19 group gathering restrictions, attendance will be limited to 150, and the wearing of masks will be mandatory. To accommodate friends, neighbors and all others who wish to participate, there will be a live video stream of the services available at: https://youtu.be/6XC2q8OH3jY In lieu of flowers, please consider donating to Mothers Against Drunk Driving in Brittaney’s name at madd.org/donate-now/. Please indicate it is a Memorial gift in her name.

The family of Brittaney Dawn Bell Burke created this Life Tributes page to make it easy to share your memories.