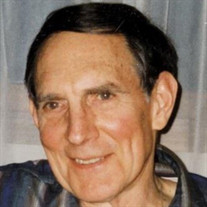 Bruce Paul Barth (89), died December 13, 2021, in Bountiful, Utah Bruce was born January 8, 1932, to George Francis Barth and Mary Eleanor Cepka in Manhattan, NY. He was the oldest of two children. He married Patricia June Wallace of Highland Falls NY on 19 December 1954. They were the parents of three children, Carin Lynn Barth, Christopher Paul Barth who died shortly after his birth, and David Wallace Barth. Bruce and Patricia were divorced in 1981. Later Bruce married Janet Lola in White Plains, NY. Bruce graduated from Princeton University in 1956 where he received an advanced degree in Chemical Engineering. He worked for Union Carbide in Bound Brook NJ. He was a pioneer in the plastics industry where he traveled the world. After his retirement in 1984, he helped run a health food store, Manna Foods, in White Plains NY where he was a cook for its lunch counter. Bruce was an avid sports fan and particularly loved the NY Yankees, He rarely missed a game. He was a very spiritual person who loved music and nature. He valued his faith, friends and family. He was preceded in death by his sister, Anita Barth, his parents George and Mary, both wives, Patricia and Janet, his daughter, Carin and son Christopher. He is survived by his son David and daughter-in-law, Ronda of Bountiful, Utah, 7 grandchildren - Brandon, Tiffani, Cameron, Jeremy, Jordan, Cody, Andrea and 6 great-grandchildren, James, Tessa, Isaac, Charlotte, Melco, and Sylas. Bruce died due to the effects of Covid 19. The family wishes to thank all those who cared for him. Services will be held as a private family gathering and memorial.

The family of Bruce Paul Barth created this Life Tributes page to make it easy to share your memories.