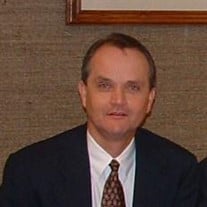 Bruce Walker Sabey June 25, 1950 – June 24, 2019 Bruce Walker Sabey passed away at his home in Kent, Washington on June 24, 2019 from Pancreatic Cancer. He was born on June 25, 1950 in Afton, (Star Valley) Wyoming to Soren Glenn Sabey and Fern Walker Sabey. He graduated from Star Valley High School in 1968 where he served as Student Body President and participated in football and basketball, both of which took Class A State Championships his senior year. He loved growing up in Star Valley and enjoyed fishing, hunting, sports and being with his friends. He graduated from Brigham Young University April, 1974 with a B. S. degree in Business Management. He married Deanne McCausland in the Salt Lake Temple on December 10, 1974. They made their home in Washington where Bruce was employed with the Weyerhaeuser Company for almost 44 years before retiring in February, 2018. Bruce was an active member of the Church of Jesus Christ of Latter-day Saints and spent his life in service. He served a two-year mission in the Gulf States Mission 1969 – 1971 and continued to serve in numerous positions throughout his life. He was humble but had a strong testimony of Jesus Christ and exemplified that testimony in his service, devotion and love to his church, family, friends and neighbors. He was preceded in death by his parents and his sister, Sandra Sabey. He is survived by his wife, Deanne and their children, Jesse Mac Sabey, Michael Beau Sabey, and Lorie Ann (Justin) Clegg, and his brother Dean (Jerris) Sabey. He loved spending time with his grandchildren, Anna Fae Sabey, Addison Lorena Sabey, Bentley Jude Clegg, Grayson Max Clegg, and Naomi Olivia Clegg. His quiet and steadfastly loyal presence will be sorely missed. We treasure the memories, experiences and example he gave us. Graveside services and interment will be 10:00 am, Friday, July 26, 2019 at the American Fork City Cemetery, 100 East 600 North, American Fork, Utah.

The family of Bruce Walker Sabey created this Life Tributes page to make it easy to share your memories.