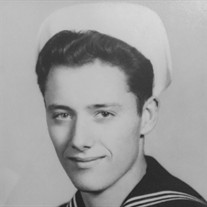 Bryan Ray Seare, Jr. 1926 - 2016 On August 7, 2016, Ray passed away peacefully surrounded by his loving family. He was born on May 12, 1926, son of Bryan Ray Seare, Sr. and Agnes Heiner Seare. Ray was born in Salt Lake City. He graduated from West High School at which time he joined the Navy. He served during World War II on the U.S.S. Tuscaloosa where he much action including seeing the flag raised on Iwo Jima. In 1947 he married Betty Lavern Angerbauer in the Salt Lake Temple. He was preceded in death by wife, Betty, their son, Steven, sister, Marion Seare Kirk and grandson, Tyler Wayne Eastman. Ray married Donna Rose on July 6th, 1956 in the Manti Temple. His first love was his family. His passion was trains. He also served as a ward clerk in the LDS Church for many years. Ray is survived by his wife, Donna, children, Maurine Seare, Melinda Seare Eastman, (Leo), Matthew, (Janice), Erin Seare-Tarbuck, (Debra) and brother, Roswell. Funeral services will be 11:00 am, Saturday, August 13, 2016 at the North Canyon 2nd Ward LDS Chapel, 100 East 3300 South, Bountiful, Utah with a viewing at the church Friday from 6:00 to 8:00 pm and Saturday prior to services from 9:45 to 10:45 am. Interment in the Salt Lake City, UT Cemetery.

The family of Bryan Ray Seare Jr created this Life Tributes page to make it easy to share your memories.