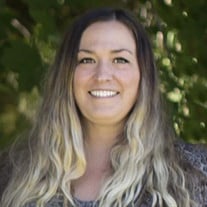 Brynn Alyssa Bunker Lambert “Brown-eyed Girl” Our beautiful brown-eyed girl, Brynn Alyssa Bunker Lambert, passed away peacefully in her sleep on December 9th, 2017. Brynn was born in Provo, Utah, on February 11th, 1980, the fourth child of Stephen and Teri Bunker. Brynn’s father was in the Army, and she lived in Hawaii, Maryland, Nevada, and Utah before graduating from Snow Canyon High School in St. George. At the time of her passing, Brynn resided in Murray, Utah. She was employed at Automatic Data Processing (ADP), and was working toward her Bachelor’s degree in Psychology. From an early age, Brynn had a wry sense of humor and a ready smile. She possessed a gift for making people feel heard without passing judgment. Brynn was especially close to her younger sister Brittany, and was a favorite aunt among her nieces and nephews. She was nicknamed “the baby whisperer” because she was so adept with children. Brynn met the love of her life, John Craig Lambert, in 2001, and they were married in 2005. They shared a passion for good food, excellent music, and pets of the feline variety. The two of them enjoyed hiking and traveled extensively. And from the start, Brynn considered Craig’s two sons, Taylor and Bailey, to be her own children, fretting about their challenges and rejoicing in their successes. Some years ago, Brynn took up running, something she enjoyed doing with the Huntsman Hometown Heroes to raise money for charity. She and her older sister Brooklyn logged many miles together. Despite certain physical challenges, Brynn did 5Ks, half marathons, and even completed an impressive 20-mile stretch of the Ogden Marathon. Brynn worked at Automatic Data Processing (ADP) for over a decade, and considered many of her coworkers to be dear friends. In turn, she was known for being kind and hilarious. Brynn spoke of becoming a social worker someday, but worried about the emotional toll inherent in the job. Those who knew her can attest that she was possessed of an enormous heart, and acutely felt the pain of anyone who was suffering. She did volunteer work to help homeless teens and veterans, fed rescue animals, and participated in many family service projects. In addition, Brynn and Craig were part of the Big Brothers Big Sisters of Utah program for many years, mentoring a six-year-old boy named Izeal who is now seventeen. Izeal too will keenly miss Brynn, who was like a second mother to him. Brynn is survived by her husband Craig, their sons Taylor and Bailey, as well as by her parents and four siblings: Brooklyn (Matthew) Evans, Benjamin (Tricia) Bunker, Brett (Jennifer) Bunker, and Brittany Bunker. Her younger brother Braden preceded her in death in 2010. The two of them are undoubtedly enjoying a glad reunion, as the heartaches they endured in this world have ebbed away. And although those who loved her have heartache still to endure, Brynn’s was a life well lived. We carry with us the hope of our own joyful reunion with our brown-eyed-girl. “Standing in the sunlight laughing / Hide behind a rainbow’s wall / Slipping and a-sliding / All along the waterfall / With you, my brown-eyed girl / You, my brown-eyed girl” Memorial services will be on Saturday, December 30, 2017 at 11:00 AM at Park 3rd Ward Meetinghouse 4825 West 7000 South, West Jordan, UT 84084

The family of Brynn Alyssa Bunker Lambert created this Life Tributes page to make it easy to share your memories.