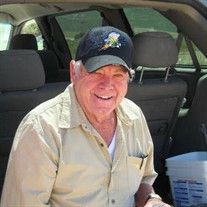 Byron "Stub" Oleen Allred, (87), beloved husband, father, grandfather and great-grandfather, passed away peacefully surrounded by his family on Saturday, April 20, 2019. He was born in Garland, Utah on September 18, 1931 to Jed and Roxie (Wood) Allred, and was the second oldest of four boys, Jerald (Jody), Brent (Benny), and Ricky. As a child, Stub started going to job sites with his father when he was only 6 years old. He would grow up in that trade to do nothing else and became a master carpenter. Eventually, he and his family moved to California, where he attended Burbank High School until he later dropped out to join the Navy so he wouldn’t get drafted into the Korean Conflict. He later was able to get his GED. Due to his construction skills he was placed into the 103rd C.B's (Construction Batallion), and ended up attached to the 1st Marine Division where he took part in the infamous Enchon Invasion in the Korean War. His service went from 1950-1953 as he experienced many exciting, horrible and unbelievable accounts, including the historic and massive withdrawal at Chosin. There he witnessed the horrors of direct, hand-to-hand combat when over 300,000 Chinese soldiers entered the conflict. After the initial stages of the Korean War, he later spent time building U.S. bases all around the South Pacific Islands where he was unfortunately involved in an underwater explosion which resulted in the complete loss of hearing in his right ear. He left the service with two Purple Heart medals, the Silver Star for Bravery medal, and other notable military citations. He gave them all back, however because, as he would always say, “I don’t get medals for killin’.” Thirteen years after the Korean War, his first marriage, and the birth of two daughters Pauline and Rebecca, Stub met and married the love of his life Margaret Ann Skillman, with whom he would spend the rest of his life. Together, they blended each of their two daughters, Pauline, Rebecca, Jennifer, and Lisa into a happy family of six. Four years later they added a son, David. During his life, Stub worked as a contractor framing and remodeling homes and other buildings throughout California. Since their only son had no biological brothers, and seeing the need to serve others, Stub and Marge participated in a foster exchange program for the Navajos on the Reservation. This program would allow Navajo kids the opportunity to attend school and live off the reservation. Roland Ben and Ronnie Whitehat became the brothers they wished they always had for David. The three boys grew up closer perhaps than biological brothers ever could, and were all taught construction by the expert hands of Stub. Raising not only those kids, but later many other foster children, Stub and Marge became Emergency Shelter Foster Parents for the county of Santa Barbara. Stub will always be known as a father to many. A faithful Latter-Day Saint, Stub would always lament the missed opportunity to have served a mission for the Church. His three sons filled in, as they became full-time missionaries, and later each married their spouse in the temple. Stub was always quick to share his testimony, if not by words, then through his actions of love and service. Later relocating to Payson, Utah, Stub was able to work with his son David for several years, building many homes; something he always treasured and would mention often. He always tried to stay busy working, saying that he’ll stop working “when they throw dirt in my face.” In his later years, he worked as a Wal-Mart greeter with his wife, sharing his smile with so many, and did so up until a few weeks of his death. Stub loved to share all of his incredible stories from his life with anyone willing to listen. But, among all his adventures, from driving race cars right out of high school, to taming horses, to leading packing trips into the High Sierra Mountains, Stub's greatest adventure and joy was his life with his sweet wife Marge and the beautiful family they created together. Stub was a light, a strength and inspiration to many. Whenever someone would tell him to “Have a good day”, he would always reply, “Everyday’s a good one, I’m alive!” He always said he had a great life, and made sure all of his family knew how much he loved them. Stub is preceded in death by his parents Jed and Roxie, two brothers, Benny and Ricky, and his second daughter Becky. He is survived by his wife Margaret, their daughters, Pauline, Jennifer and Lisa; sons David, Roland and Ronnie and their families; his older brother Jody; and 16 grandkids and 7 great grandkids. Funeral services will be Saturday April 27 at 11 am LDS church building 789 E Arrowhead Trail. Payson UT 84651

The family of Byron Oleen Allred created this Life Tributes page to make it easy to share your memories.