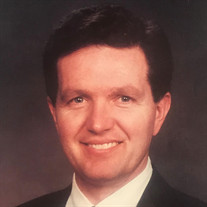 Byron Graves Warner 1956 ~ 2018 Byron Graves Warner, one of the kindest and best men to ever walk the earth, walked courageously into eternity on Friday, December 21, 2018, at Mount Sinai Hospital in New York City where he was being treated for cancer. He and his wife were joined in New York by their six children and spouses, two brothers, a sister and a sister-in-law because they all loved him dearly. Byron was born February 3, 1956 in Salt Lake City to Max Patten Graves and Emily Jane Moore Graves. He was the third of five children. When Byron was three years old, his parents died. Byron and his brothers Max and Dick were raised by Jack and Phebe Warner (children Sharen, Judy, Diane, Rick and Barbara). His sister Bobbi and baby brother, Gail were raised by an aunt and uncle. A glorious reunion took place with his birth siblings when Byron was 35 years old. Byron had a wonderful childhood exploring Mt. Olympus and Millcreek Canyon with his brothers and friends. Jack Warner passed away when Byron was 14 and Phebe later married Robert Timpson (children David, Karl and Mary). Byron loved all of the father figures in his life, including his father-in-law, Rulon Bickmore. He graduated from Skyline High School in 1974 and the University of Utah in 1981. He served a mission for The Church of Jesus Christ of Latter-Day Saints to Upstate New York, which was one of the highlights of his life. Byron’s family and his faith were the center of his life. He loved people and immediately saw the good in everyone. He coached his four sons on 50 Junior Jazz, Little League and Olympus High Volleyball teams. He was a cub master, scout master and earned the rank of Silver Beaver. He attended every music and dance performance of his two daughters. He would stop what he was doing to have tea parties with his little girls and their dolls when they asked him to because they may not have asked him to tomorrow. He was the best father and grandpa a child could ever have. He loved his wife and children beyond comprehension and he was always kind. He served as bishop of the Olympus 3rd Ward until March of this year and loved every person in his ward family and they loved him in return. Byron loved photography, world travel, tennis and spending time teaching his sons carpentry skills in their homes. He loved nature and taking his family to the cabin. Byron’s legacy: loving wife: Janice Mae, four sons: Keith (Ann), Scott (Cherise), John (Allie), Greg (Lindsay), two daughters: Missy Smith (Jordan) and Bryanna. 12 grandchildren. Easton William was waiting for him in heaven. To all of our dear family, friends, ward and stake families and caring doctors and nurses who have fought tirelessly along with us to save Byron, we say profoundly, thank you. Come celebrate the life of this amazing and beloved man 12:00 noon, Thursday, January 3rd, 2019 at the Olympus Third Ward, 4100 South Camille Street in Holladay, Utah. There will be a gathering at the same building on Wednesday, January 2nd from 6:00 to 8:00pm, and Thursday prior to services from 10:45 to 11:45 am. To honor Byron, have a cherry chocolate shake and please, always be kind!

Byron Graves Warner 1956 ~ 2018 Byron Graves Warner, one of the kindest and best men to ever walk the earth, walked courageously into eternity on Friday, December 21, 2018, at Mount Sinai Hospital in New York City where he was being treated... View Obituary & Service Information

The family of Byron Graves Warner created this Life Tributes page to make it easy to share your memories.

Byron Graves Warner, one of...