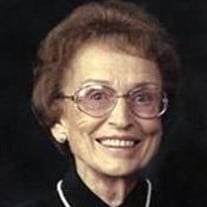 There is an empty cot in the bunkhouse tonight... Virginia Schofield Boyce left on March 24, 2012 to have a belated 90th Birthday Party with her family and friends on the other side of the veil. Virginia was born in her home in Hiko, Nevada on February 25th, 1922. She was born of pioneer stock with 10 sisters and 1 brother. Quite a cowgirl, she would round up mustang horses off the desert, drive them to the corral on their ranch, and then break them to ride. Between milking cows morning and night, gathering eggs twice a day, and driving a team of horses for the hay to be gathered, she found time to trap coyotes so their hides could be sold. Virginia attended school in Alamo, Nevada and college at BYU. While in Provo, she met and married her sweetheart of 61 years, Garth I. Boyce. Garth used to tell people that it was the smell of manure on their hands that brought them together. It was hard for Virginia to leave what she loved so much: family, friends, and her home of 50 years in the river bottoms of Provo. She is survived by her daughters Vicki Matthews (Gary), Andrea Hooley, 9 grandchildren: Blake Matthews (Sydney), Amy Black (Steven), Corbin Matthews (Lizzi), Jeremy Matthews (Allison), Megan, Tess, and Kate Hooley, Gabe Hooley (Lori), John Hooley (Melissa), and 23 great grand children. She was also survived by 3 sisters, Ila Bishop (Clair), Roberta Marcov (Allen), and Patricia Jupiter (Clyde). Virginia was beautiful, witty, and a worker. She gave her all for family, friends, and her Savior. She served as relief society president and teacher, primary teacher, and visiting teacher all in the Edgemont First Ward. Virginia and Garth were L.D.S. missionaries serving in Durant, Oklahoma, a part of the Dallas, Texas Mission. With a feeling of great joy, they were able to see the first L.D.S. chapel built in Durant. Virginia, when asked who she wanted to visit with first when she crossed the veil, her beloved husband or her mother she lost when she was 9 years old, answered "My Savior Jesus Christ." She passed the test. Funeral services will be held Wednesday, March 28th at the Edgemont First Ward chapel (303 W. 3700 N Provo, UT 84604) at 11:00 a.m. Viewings will be held Tuesday evening from 6:30-8:00p.m., and Wednesday morning 9:30-10:45a.m., prior to services. Interment will be at the Provo City Cemetery.

There is an empty cot in the bunkhouse tonight... Virginia Schofield Boyce left on March 24, 2012 to have a belated 90th Birthday Party with her family and friends on the other side of the veil. Virginia was born in her home in Hiko, Nevada... View Obituary & Service Information

The family of C. Virginia Boyce created this Life Tributes page to make it easy to share your memories.

There is an empty cot in the bunkhouse tonight... Virginia Schofield...