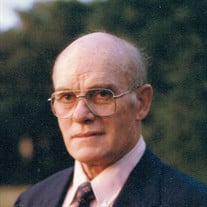 Calvert Allen, 89, of Farmington, Utah passed away peacefully at his home in Farmington Utah, the evening of October 31, 2017. He was born the youngest of seven children August 5th, 1928 in Antimony Utah to Chester Jehiel and Ida Laprele Flanigan Allen. Born on the family ranch he grew up farming and herding turkeys. Later in life, during the era of CB radio, he took on the handle of "Turkey Herder" in memory of his days on the ranch. He attended school in Antimony through 7th grade, then attended schools in Circleville, Richfield & Springville, Utah. Calvert had many fond memories of growing up in a small town and loved to tell stories about “that rural life”. He attended Provo Diesel before serving in the Korean War Conflict as an aircraft mechanic on Okinawa. Later he certified at Northrup Aeronautical Institute in Inglewood CA. He married June Augusta Rapp, December 27, 1957 in Convis Township, Michigan. The marriage was later solemnized in the Salt Lake LDS temple January 14, 1987. He worked on the Glen Canyon Dam project hauling 1000 loads of concrete to the dam from Clarkdale Arizona, more than any other person. He retired in 1989 from Pacific Intermountain Express after working many years. Calvert was a member of the million mile club (for driving a million miles without an accident). He raised his family in Farmington, Utah. He was naturally curious and mechanically gifted having a reputation in his community as the "man who could fix anything". Calvert always had a solution to your car problem and a story to tell. He was a lifelong member of the Church of Jesus Christ of Latter Day Saints and was ordained a High Priest shortly before falling ill. He is survived by wife, June; sister, Joyce Allen Nielsen; children, Celeste Metz; Norman (Tracy) Allen, Celena (Brett) Carlson, Katrina (Thomas) Appiah, Clinton (Sheri) Allen; 14 grandchildren and 2 great grandchildren. Preceded in death by parents, sister, Dott Poulson; brothers; Champ, Wayne, Lark, & Drue, son in Law Stuart Metz. The family would like to thank all the nurses and aides that lovingly cared for Calvert this past year. In lieu of flowers, donations to: IHC Hospice https://intermountainhealthcare.org/giving-volunteering/intermountain-foundation/ways-to-give/ or American Patriot Service Corp (APSCNP) https://apscnp.org/ Funeral services will be at 12 noon on Monday November 6, 2017 at the Farmington S. LDS Stake Center 695 S. 200 E. Farmington, Utah. Viewing will be on Sunday November 5th from 6:30 to 8:00 p.m. and on Monday from 10:30 to 11:30 a.m. at the church.

Calvert Allen, 89, of Farmington, Utah passed away peacefully at his home in Farmington Utah, the evening of October 31, 2017. He was born the youngest of seven children August 5th, 1928 in Antimony Utah to Chester Jehiel and Ida Laprele Flanigan... View Obituary & Service Information

The family of Calvert Allen created this Life Tributes page to make it easy to share your memories.