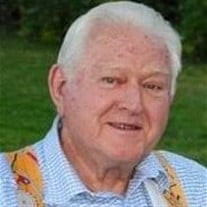 Calvin Wilford Ashby 1931 - 2018 Calvin Wilford Ashby was born July 27, 1931, in Richfield, Utah, the son of Wilford Lyman and Ivy Gertrude Christensen Ashby. He passed away at home in Provo, Utah on July 4, 2018. Calvin grew up in Richfield, Utah where he enjoyed building model airplanes, making root beer and homemade ice cream, and working in the large family garden. He once built a go-cart powered by an old washing machine motor. Gardening was one of his favorite activities, and he could be found out in his yard (even in his wheelchair) up until a few days before his death. After high school, Calvin attended Snow College in Ephraim, Utah, where he graduated in 1951. He received an LDS mission call to the North Central States Mission, but his call was canceled because the government would not permit the Church to call missionaries during the Korean War. He attended Brigham Young University until he was inducted into the U.S. Army in 1952. After basic training at Fort Ord, where he received a Quartermaster’s certification as a cook, he was sent to Germany where he spent the remainder of his two years of military service. He was honorably discharged in August 1954. Following his return home from Germany, Calvin enrolled in the Industrial Arts program at Brigham Young University. He became proficient at building beautiful cabinetry and furniture. During his first term, Calvin enrolled in an Educational Psychology class. It was in this class that he first saw Leah Burton. He told his friends, “I hope that girl isn’t taken. I’m going to marry her!” He saved a seat for her the next day, and the rest is history. They were married September 15, 1955, in the Manti LDS Temple. They had been married for almost 60 years when Leah passed away unexpectedly in 2015. He was devoted to her and missed her sorely. While Calvin was completing his student teaching, he was offered the job as the industrial arts teacher at Dixon Junior High School in Provo, Utah. This began his lifelong career as an industrial arts teacher. He taught for 21 years at Dixon, where he developed one of the best two-year shop programs in the state and gained many wonderful, lifelong friends. (Some of them conspired to pull some very funny tricks on both students and other faculty members.) In 1977, Provo City School District asked Calvin to leave Dixon and become part of the faculty at the newly built Timpview High School. It was a wonderful opportunity for him to build a new four-year program in a new building, teaching older students. He was a positive influence in the lives of the young men who attended his classes, and many of them liked to visit him long after graduating. After 31 years in the classroom, Calvin was offered early retirement in 1987. His work continued, however, in his home shop where he and his sons and son-in-law built custom cabinets and other fine furniture. Calvin’s creations were always top quality--shoddy work was absolutely unacceptable. He spent many happy hours in the shop and in his garden. He was generous to a fault, sharing his time, talents, and garden produce with anyone who might be in need, along with a joke of some kind. Dad’s most profound influence was in his home. He taught his children and grandchildren how to work hard and was proud of their many talents and accomplishments. He was a faithful son, a loving husband, an honorable father and grandfather, and a good neighbor. He will be greatly missed. Calvin is survived by his children, Karen Ashby, Kent (Sandi) Ashby, Kirk (Patrice) Ashby, Kerry (Jean) Ashby, Kim (Lesleigh) Ashby, Julie (Phil) Swindler, and Klay (Jenny) Ashby; 21 grandchildren; two great-granddaughters; and his youngest brother, Stan Ashby. He was preceded in death by his wife (Leah), grandson (Dallin), and two brothers (Grant and Dave). Funeral Services will be 12:00 Noon, Saturday, July 14, 2018 at the Provo South Stake Center, 1122 North Grand Avenue, Provo, Utah where a viewing will be held from 6:00 to 8:00 pm, Friday, July 13, 2018 and Saturday prior to services from 10:00 to 11:45 am. Interment in the Provo City Cemetery. In honor of Dad, please bring any canes that he made for you.

The family of Calvin Wilford Ashby created this Life Tributes page to make it easy to share your memories.