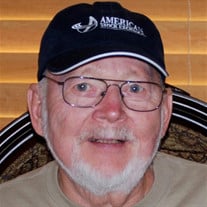 Calvin John Hickey, 85, died Wednesday, February 1, 2017 at Cedarwood Senior Living Center in Sandy, Utah. He passed away from natural causes of being freaking old. Calvin was born April 20, 1931 to Calvin “Red” Hickey and Pearl Duncan Hickey in Collingwood, Ontario, Canada, the oldest of 2 children. After traveling the country with his big band musician father as a child, he grew up in Walled Lake, Michigan where his father was the regular performer at the Walled Lake Amusement Park casino and dance hall and where he worked virtually every ride at the park. He was an outgoing, upbeat person that people enjoyed being around. He graduated from Walled Lake High School in 1951. Calvin served in the Air Force during the Korean War as a plane welder. He was stationed at a US air force base near Ipswich, England where he met his beautiful bride, Sylvia Lillian Nora Turner. They were married on October 9, 1954 in Ipswich, England. Following military service, Calvin and Sylvia moved to Michigan where they raised their family. Calvin was proud to work his entire life as an ironworker for local 25. Calvin was passionate about hunting and fishing. He hunted deer, moose, bear, wild boar, and more; most commonly hunting deer with a bow. He also enjoyed serving as a volunteer fireman in Union Lake, Michigan. He did the most important thing a father can do – he made his children feel safe. He was super supportive to all of his children, regularly showing up in dirty clothes from work to watch them in sports. His favorite saying to his kids after they were all grow up was “I’m here for you if you need anything at all honey.” Calvin is survived by his children Michael and Jan Hickey of Manistique, Michigan, Nadine and Karl Kleopfer of Rupert, Idaho, Paul and Sandra Hickey of Sandy, Utah, John and Emily Hickey of Mapleton, Utah, Dawn Hickey of Rupert, Idaho, Kelly Hickey of Lehi, Utah; 19 grandchildren; 11 great grandchildren; and sister, MaryAnn Stover of Phoenix, Arizona. Funeral services will be held 12:00 Noon, Saturday, February 4, 2017 at the, Heyburn LDS Church, 530 Villa Drive, Heyburn, ID with a viewing prior to services from 11:00 am to 12:00 Noon. Burial will follow at the Paul, Idaho Cemetery.

The family of Calvin John Hickey created this Life Tributes page to make it easy to share your memories.