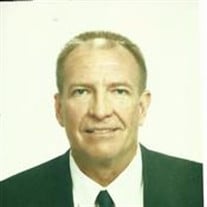 Father, grandpa, brother, coworker, friend... Today, July 16th 2013, we bid farewell to all of these and more as we lay to rest Calvin Leroy Kartchner. Born on February 8th, 1954, in Logan, Utah, Calvin made his home in the same house where his parents lived in Clearfield, Utah. Calvin was baptized a member of The Church of Jesus Christ of Latter Day Saints on March 3rd, 1962, served an honorable full time mission in the Chicago, Illinois Mission, and having served in numerous positions in the church was ultimately ordained to the office of High Priest. He liked spending time working on cars, riding his mountain bike, camping, and reading, but he loved doing these things when he was able to share his interests with his family. As a father, he laid the groundwork for his children to learn and live the principles of the gospel. He taught them the value of self reliance, honest living, and the meaning of a good day's work. As a former member of the High Council in the Clearfield, UT Stake, Calvin studied diligently and taught the principles of the Gospel with clarity and with an unshakeable testimony. Calvin also proudly served as a member of the civil service for the US Air Force at Hill Air Force Base for over ten years. Calvin was preceded in death by his parents, Kenneth and Nila Kartchner, as well as three grandchildren. The knowledge of their special reunion in the paradisiacal rest of our Father brings peace and comfort to those he left behind. Namely, his brothers and sisters, Alan Kartchner, Barbara Kenworthy, Norma Shell, Glen Kartchner, Marlene Harlow, and Don Kartchner, as well as his four children, their spouses, and their families, Kamilyn and Brian Hadley and their four children (Curtis, Grant, Caleb, and Genasys), Thesha and Tag Choate and their two children (Tyler and Reagan), Cindy and Wade Roberts and their three children (Bronson, Tyus, and Ajia), and Dustin and Breanna Kartchner and their three children (Gavin, Ryker, and Lawrence). His beloved family will forever keep his memory in our hearts as we strive to live up to the example and legacy Calvin leaves behind. Funeral services will be held on Saturday, July 20th at 10:00 AM at the LDS chapel located at 838 East 600 South, Clearfield, UT 84015 with internment services to follow immediately thereafter at the Clearfield cemetery located at 1050 South, State Street, Clearfield, UT 84015.

Father, grandpa, brother, coworker, friend... Today, July 16th 2013, we bid farewell to all of these and more as we lay to rest Calvin Leroy Kartchner. Born on February 8th, 1954, in Logan, Utah, Calvin made his home in the same house where... View Obituary & Service Information

The family of Calvin L Kartchner created this Life Tributes page to make it easy to share your memories.