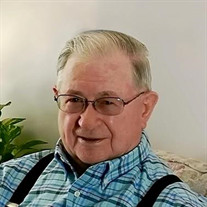 Calvin Ricks Kowallis returned to his heavenly home Saturday, March 30, 2019, in South Jordan, Utah. He was born January 5, 1925, to Otto and Carrie Ricks Kowallis and grew up in Vernal and Logan, Utah. Immediately following his high school graduation, he was drafted into the army. At the conclusion of WWII, he returned to Utah where he attended Utah State for a short time before serving an LDS mission to Southern California. On his return trip from California, he stopped to see his sister and took particular notice of her roommate, Rada Hall. He and Rada were married eight months later. They moved to Forest Grove, Oregon, where Calvin completed optometry school. They returned to the Uintah Basin, this time to Roosevelt, to establish his practice and raise their family. Calvin was active in both the Church of Jesus Christ of Latter-day Saints and the community. He served as an LDS bishop, stake president and member of the Vernal Utah Temple Presidency, as well as eight years on the Roosevelt City Council. After living in Roosevelt 51 years, he and Rada relocated to South Jordan, Utah, where they have lived for the past 14 years. Both his children and grandchildren will always remember picnicking at local reservoirs and water skiing behind Grandpa’s boat. His children will also remember the work ethic he strove to instill by working in their large family garden. They will always cherish the love, peace, and respect present in the home he and Rada created. Surely he was a man without guile. Survived by his wife Rada; children Lori Gardner (Brad), Trudy Christensen (Monte), Scott Kowallis (Sue), Callean Laird (Scott), and Roger Kowallis (Renee); 19 grandchildren; 52 great grandchildren; and his siblings, Donna Hansen, Louise Romney and Ted Kowallis. Preceded in death by his parents, his brother, Karl Kowallis, and sister, Theda Parkinson, and one great grandson, Tacen Kowallis. Services will be held Friday, April 5, 2019, at 7511 South 2700 West, West Jordan, UT, viewing 10:00 am and funeral at 11:00 am. In lieu of flowers, please consider donations to LDS Humanitarian Fund.

The family of Calvin Ricks Kowallis created this Life Tributes page to make it easy to share your memories.