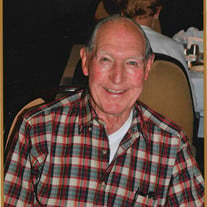 Calvin Short December 6, 1930 – December 20, 2021– Sandy UT Cal Short completed his last logbook on Earth on December 20, 2021, at his home in Sandy, UT. He was “called out” by the Great Dispatcher on a new “Run”, the Afterlife. We are confident he is happy moving eternal freight on a long haul that has no end and no shortage of work. Calvin was born on the Short Farm near Rupert, Idaho on December 6, 1930, along with his twin brother Alvin. They were the youngest children of Horace F. and Pearl B. (Spears) Short, including two older sisters, Mable (Charles) and Retha (Lawson), and seven older brothers, Ray, Ralph, Roy, Reid, Earl, Hugh, and Paul. Work was Cal’s life, helping his family and neighbors plant and harvest sugar beets and spuds, feeding cattle in the winter and during the great blizzard of 1949, helping with the Charles Family Sawmill at Sublett, as a camp jack and ranch hand for the Basque Sheepherder Frank Jugalard. Cal attended the Empire and Rupert High Schools where he exceled at basketball. In June 1950 Cal was drafted and served in the U.S. Army for three years, including the Korean War. After his training in El Paso, TX and Fort Dix, NJ, he was assigned to an Air Defense Artillery outpost as an anti-aircraft gunner guarding an air base in Korea. After discharge in 1953, Cal returned to Idaho and began working as a driver for Craven’s Allied Van Lines and later Concrete Products and Services. Cal was hired by Garrett Freight Lines in 1961. He drove for Garrett’s, later ANR, and Northwest Trucking until 1995. He was a member of the Teamsters Labor Union for 34 years. He worked briefly as a police officer in Payette, ID during a temporary layoff. After retirement he became restless and accepted offers to drive for two start-up freight companies. He later settled into a school crossing guard job for the Sandy School District. He then wanted more work and began driving special needs students for Wasatch Transportation for the Utah Schools for the Deaf and Blind. Cal worked into his mid-80’s. Cal loved work and was admired and respected by his co-workers and supervisors for his work ethic and honesty. When Garrett’s required that all drivers have a high school diploma, his supervisor made sure that Cal was given an opportunity to earn his General Education Diploma. Cal married Sharon Royter in Pocatello ID in 1967. They had two daughters, Kerrie (Short Lewis) and Becky (Martinez). He had two sons, Brant and Nile, from an earlier marriage with Barbara Nussbaum in 1954. Cal loved spending time with his in-laws, “the Scotts” (Coral and Irvin). He looked forward to their family celebrations and visiting with Kay, Royce, Christy, and Barney and all of his nieces and nephews. In his younger years Cal enjoyed hunting deer and pheasants. He loved trout fishing and also deep-sea fishing with his friend Charlie Hutton, on the Good Time Charlie off Newport, OR. He maintained lifelong relationships with driving partners Jerry Browne, Red Hansen, Bill Bartlett, and Bob Luekenga. He was a member of the Pocatello Elks Lodge #674 for over 50 years. Garrett drivers stayed in a motel near Mile High Stadium in the 1960’s for their eight-hour rest and Cal became a devoted Denver Bronco fan. After moving to Utah in the 1980’s Cal also became an avid fan of the hometown Utah Jazz and he followed the Jazz like a second family. The John Deere Tractor he rolled into a drain ditch at 16 didn’t end his life. The dump truck filled with gravel that t-boned him at 17 didn’t end his life. The Korean War didn’t end his life. A runaway-semi off White Bird Pass didn’t end his life (he was in the sleeper when his partner woke him saying he could not stop the truck. Cal yelled, “You better or we are dead.” A 200 car pile-up and cab-fire in the Los Angeles fog didn’t end his life. More than old age, it was his inability to help with chores, tend to his garden, and work for a living that ended his life. Cal is survived by: His wife, Sharon Sandy UT, daughters Kerrie (Darrell Lewis), Taylorsville UT, and Becky (Jeffrey Martinez) Midvale UT. Sons, Brant (Dayle Hardy-Short) Flagstaff AZ, and Nile (Mariann Spears), Kimbery WI. One brother, Paul (Barbara) Twin Falls ID. Two Grandsons, Spencer, Flagstaff AZ, and Keene, Spokane WA. Two Granddaughters, Marguerite (Kyle Yackeschi) Ketchikan AK, and Heidi (Robert Weakly) Seattle WA. His much-loved Granddog, Murphy Martinez. Cal is preceded in death by his parents, two sisters, six brothers, one son-in-law, and several nieces and nephews. All Services will be held at Cornelison Funeral Home, Pocatello ID, on Tuesday, January 4, 2022. Visitation will be held at 11:30 am and the funeral following at 1:00 pm. Intermittent Graveside services at Restlawn Memorial Gardens in Pocatello with a luncheon to follow at the Pocatello Elk’s Lodge.

The family of Calvin Short created this Life Tributes page to make it easy to share your memories.