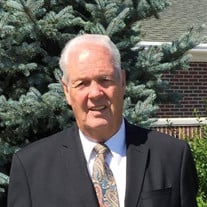 Carl Max Barnum 1942 - 2019 Carl Max Barnum, 77, of Payson Utah, passed away from complications from a heart attack, Sunday, April 28, 2019, surrounded by his loving family. Max was born to LaRue Barnum and Wanda Cooper Barnum, January 8, 1942, in Overton, Clark County, Nevada. He graduated from Moses Lake High in Washington State in 1960. He served a full-time mission for the Church of Jesus Christ of Latter-day Saints in the Gulf States Mission from 1961-1963. He served in the Army Reserve 1963-1976. He married his sweetheart Constance Joy Christopherson in 1966 in the Oakland, California Temple. Together they were blessed with ten children. He leaves as his legacy nine children: Kimberley Au (Larry), Troy Barnum (Norma), Angela Neal, Jason Barnum (Diana), Sarina Yerkes (Clifford), Shawn Barnum (Camille), Justin Barnum (Andrea), Marnae Carter (Clinton), and Brittany Tuckett (Blake). He also leaves to cherish his memory, thirty five grandchildren, and six siblings. His family remember him as welcoming, generous, and always ready with a joke. He was preceded in death by LaRue Barnum, (father), Wanda Barnum (mother), Carolyn Winder (sister), David Barnum (brother), Christopher Barnum (son) and Cooper Barnum (grandson). Max faithfully served in and enjoyed many callings as a member of The Church of Jesus Christ of Latter-Day Saints including Nursery Leader, Primary Teacher, Young Men and Elders Quorum Presidents. High Priest Group Leader, Branch Presidency, Temple Ordinance Worker. He was a hard worker all of his life and loved to farm. In his later years grew a large garden and kept all of his children, grandchildren, friends, and neighbors well-stocked with produce during the summer months, and preserves the rest of the year. Max loved his family, delighted in every new child and grandchild, and loved babysitting grandchildren in his retirement. He found so much joy in his marriage that he was determined that each of his posterity should find an eternal companion like his. He delighted in matchmaking and had in his large family an endless supply of young adults to fix-up. Max was affable and outgoing, and made friends anywhere and everywhere he went. Funeral services will be 1:00 pm, Friday, May 3, 2019 at the Mountain View 8th Ward Chapel, 1023 Arrowhead Trail, Payson, Utah with a viewing prior to services from 11:30 to 12:45 pm. Interment in the Payson City Cemetery.

The family of Carl Max Barnum created this Life Tributes page to make it easy to share your memories.