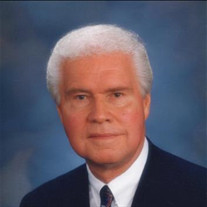 Carl Richard “Dick” Chase 1931 - 2016 Carl Richard “Dick” Chase, 84, of Salt Lake City, Utah left this earth to join his eternal companion on May 30th, 2016. He was born to Carl and Maxine Chase on October 30th, 1931. He married his first wife early on in his life and together, they brought two children into the world. He later married his true love, Beverly Simper Spencer on December 14th, 1959. They were sealed for all time and eternity in the Salt Lake City LDS temple in 1979. Together, they raised Beverly’s three sons and completed their family by adding one more. He had a strong testimony of the gospel of Jesus Christ and he served diligently in many callings within the church, including Bishop. In these callings, and in life, he touched many lives with his faith, pride, and his rarely voiced, but easily felt, love for others. He always had a way of sharing deep, meaningful life lessons in a simple, easy to accept manner. He made you want to be a better person by helping you see your own self worth and teaching you by example how to love and respect your body and self. Dick was a very dedicated man, and it showed in many aspects of his life, from his love and devotion to family, the consistency of his routines, as well as his work for the church. He spent many years working for the LDS Church Distribution Center in SLC. When he moved to Mayfield, Utah, he spent his time serving at the Manti Temple. He is survived by his children, Carl Richard Jr., Brian, Kevin Wayne, Marvin Kory, Steve Todd, and Michael David; his 16 grand children and 33 great-grandchildren. He was preceded in death by his father, Carl Robinson Chase; his mother, Mary Maxine LeSeuer and his great-grandson, Evan Gerald Chase. A viewing will be held Thursday, June 2nd, from 6-8pm at the Salt Lake Riverside Stake House located at 1148 W 500 N Salt Lake City, Utah. A graveside service will be held Friday, June 3, 2016, starting at 11:00 am at the Mount Olivet Cemetery located at 1342 East 5th South, Salt Lake City, Utah.

The family of Carl Richard "Dick Chase created this Life Tributes page to make it easy to share your memories.