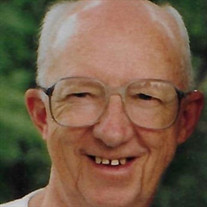 Carl “Ronald” Edvalson peacefully passed from this life on June 10th, ten days following his 90th birthday. He was born May 31, 1931 to Carl Isaac and Rhea Josephine Bingham Edvalson of Ogden, Utah. He attended area schools and was a proud graduate of Ogden High School’s class of 1949. After receiving his Associate degree from Weber College, he attended Brigham Young University and received his Bachelor Degree in Business Administration in May of 1959. After growing up in the old Ogden Thirteenth Ward, Ron served a mission for the Church of Jesus Christ of Latter-Day Saints in the Central Atlantic States and served in many other church callings throughout his life. From 1953 to 1955, Ron served in the U.S. Army as a cook with the 780th Field Artillery Battalion in Korea. He loved his country and treasured his time of service and received the “Ambassador for Peace” medal from the Republic of Korea in 2020 for his service in behalf of their country. In July of 1960, he married Brenda Joy Jensen in the Salt Lake LDS Temple. After spending time in the Los Angeles area, they moved to Kaysville and found their home there. Many thought he worked in the FBI, others, as a spy, but his actual career was an investigator with the United States Civil Service Commission. He conducted numerous background security investigations for government agencies throughout the country. After retiring from Federal Service, he worked at IRS, Clarence Knight, Avis Car Rentals, and Morgan Management Company. He was a hard worker and worked with great integrity throughout his life. Summers were spent camping as a family at their property in Evergreen Park, and seeing the state of Utah in the motor home. He loved science, astronomy, weather, ‘Dad Jokes’, trivia, quail and technology, from the first calculator to the addition of Alexa in his home. In his last moments of life, he still found the energy to ask Alexa the temperature. He loved nature, walks around the block, watching balloons fly, and proving he could do ten push-ups a day past his 80th birthday. He kept in touch with many school, mission, and army pals throughout his life, remembering fondly past associations. He is survived by his wife, Brenda, and five children, Cindy (Jim) Singleton, Dan (Janet) Edvalson, Sheri (Dave) Allred, Kristin (Geoff) Wardle, Monica (Mark) Zesiger, a brother in law, Blaine Rhodes, and a sister-in-law, Diana Edvalson. Other survivors include thirteen grandchildren and twelve great-grandchildren. A visitation will be held on Thursday, June 17, 2021 from 10:00-11:00 a.m. at the LDS Church at 1037 Crestwood Road in Kaysville. Interment with military honors will follow at the Kaysville City Cemetery. A private family viewing will precede the services from 9:00-9:45 a.m. Special thanks to Debbie Thaxton from Applegate Hospice as well as friends from the Kaysville 10th ward. Services are being provided by Premier Funeral Services.

Carl &#8220;Ronald&#8221; Edvalson peacefully passed from this life on June 10th, ten days following his 90th birthday. He was born May 31, 1931 to Carl Isaac and Rhea Josephine Bingham Edvalson of Ogden, Utah. He attended area schools and was... View Obituary & Service Information

The family of Carl Ronald Edvalson created this Life Tributes page to make it easy to share your memories.

Carl “Ronald” Edvalson peacefully passed from this life on June...