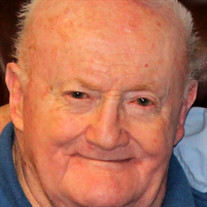 CARL WESTON MAUGHAN Carl Weston Maughan, 84 years old, passed away peacefully on Tuesday, November 17, 2020 at the Country Pines Retirement Community in Clinton, Utah. He was born September 1, 1936 in Bakersfield, California, the son of Weston Perkins and Elsie Wyatt Maughan. Carl’s parents moved around quite a bit from Logan to Orem, Utah, before moving to Franklin, Idaho. Graduating from Preston High School, Carl moved to Salt Lake City, Utah where he attended Stevens–Henager Business College, obtaining an honors degree in Accounting. Carl joined the U.S. Army where he was stationed at Fort Lewis, Washington. A Field Communication Crewman, taking courses for a Radio Teletype Operator, Carl later found himself laying communication cable in Korea, only to find, “the Korean soldiers following us as our unit lay the cable only to take it back up again.” He received an Honorable Discharge on January 26, 1965. Carl moved to Aspen, Colorado where he had an interior decorating business, meeting and doing business dealings with such clients as Lucille Ball and Steve Martin. Moving to Durango, Colorado, spending many years there, Carl moved to Prescott, Arizona where he spent his later years of life. Loving his time in Prescott, wanting to “finish his life there,” circumstances arose and he found himself living in Clinton, Utah. Finishing his earthly life, Carl spent his last remaining months close to his loving family, especially enjoying their presents of Cinnamon Altoids and Coke Zero. The family of Carl wishes to give thanks to the V.A. Hospital in Prescott, Arizona for the year plus they attended to Carl’s needs and helped him with his multiplicity of cares. We are blessed and express gratitude to the Country Pines Retirement Community in Clinton, Utah for their tender, special loving care to Carl before returning to heaven and his missed loved ones above. We as a family are grateful to all those who have served Carl in any capacity from his nurses, staff, to care takers or any and all who have made his hospital and retirement community his home for his last remaining time of mortality. A special outpouring of thanks to Robert and Ruthie Moore and their family for all their love and care of Carl while he lived in Prescott for all of those years. Carl was preceded in death by his parents. He is survived by his brother Philip (Jean), and many nieces and nephews. Cremation services were provided by Premier Funeral Services of Roy. A celebration of life will be celebrated privately by family before a private family graveside service with Veteran honors will be conducted at 12 noon at the Wellsville, Utah Cemetery on Saturday, November 28, 2020.

The family of Carl Weston Maughan created this Life Tributes page to make it easy to share your memories.