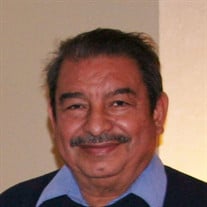 Carlos Jiménez Cruz 1941 – 2016 Carlos Jiménez Cruz (our beloved Papa Carlos) peacefully passed away surrounded by his loved ones on Monday August 15, 2016 in Salt Lake City, Utah at the age of 74 as consequence of a respiratory failure due to pneumonia and neurosarcoid. He was born in Tuxpan, Veracruz, Mexico to Carlos Jimenez Soto and Agripina Cruz Ugalde on October 9, 1941, being the firstborn of eight children. He married, and was later sealed in the Mexico City Temple, to his loving companion, Lidia Almazan Rodriguez, and had six children, Adriana Jimenez, Lidia Kelliher, Carlos S. Jimenez, Rocio Rothaar, Conchis Irvin and Dax C. A. Jimenez; with eight grandchildren, Adrian and Alan Jimenez; Andres, Andria and Alex Irvin; Sabrina, Vanessa and Bella Rothaar; and with two great-granddaughters, Giselle and Valeria. He obtained two degrees in civil engineering, one from the Autonomous National University of Mexico (UNAM) in Mexico City during his youth and another from the University of Utah in Salt Lake City at the age of 70. He worked most of his professional career as a regional director for the National Railroad of Mexico, his area of expertise being bridges and structures, always conducting himself with honesty and integrity during his tenure there. Carlos was a meticulous man and the crispiness of his handiwork can be noticed in the bridges he built as well as on his children school projects he helped them with and even on his impeccable calligraphy. Carlos also taught seminary to the youth of the Church in Mexico and was a Church instructor. He was kind and of subtle demeanor. Although possessor of a sharp mind and acute intellect, he was never pretentious or prideful. He was always prompt to give words of guidance and encouragement to those around him. He was indeed “meek and lowly of heart” and a peacemaker. Carlos was an avid reader and accumulated a large collection of books with a wide range of interests. He liked to be well-informed and enjoyed the simple everyday delights. He was an extraordinary man leading an ordinary, but never pedestrian, life. He was a competitive chess player and liked the quiet tranquility of fishing. He found joy and rejoiced in his posterity. His kids, grandkids, and great-grandkids were a constant source of pride and happiness for him. Carlos was a generous man. He valued education very highly and was constantly willing to share his knowledge with those in need of learning, whether by assisting a younger brother with his homework assignment during his childhood, or his own children as a young father, or by helping college classmates to comprehend difficult concepts. Carlos had the ability to explain complex ideas in simple terms easy to understand by anyone. Carlos was a compassionate and tolerant man, he judged no one unrighteously or otherwise. He loved freely, anyone and everyone, no matter how they behave or treated him; he didn’t know how to hold a grudge. He was an exemplar of charity, forgiveness and longsuffering. As a husband, Carlos was a caring and unselfish companion always making the needs of his wife a priority. He deeply loved his wife, Lidia. She will remember him today and always with love, respect and admiration for his honesty, patience and love as husband, father and grandfather. As a Father, he provided his own with what they truly needed that they might never want. All he had, he gave to his children. He is a pillar of valor and wisdom for them. He sheltered his children and made them stronger. Papa Carlos was a builder, a mentor, and a visionary but he will mostly be remembered as an understanding, supportive and loving husband, father, grandfather, and great-grandfather Our deepest, heartfelt, and perennial gratitude to all of the University of Utah Hospital MICU medical and care teams for their compassionate and dedicated service given to Papa Carlos during the last weeks of his mortal journey. Carlos was preceded in death by both of his parents and his siblings, Jose Luis and Patricia. He is survived by his wife, Lidia, and all his children, grandchildren and great-granddaughters. Friends and acquaintances may visit the family and pay respects during a 24-hour wake that will be held at the home of Patricia Kelliher, Carlos’s daughter, beginning on Wednesday August 24 at 3 p.m. at 7874 S 965 E Sandy Utah. A viewing will take place from 5 to 5:45 p.m. followed by the funeral services at 6 p.m. on Thursday, August 25, 2016 at Cottonwood 11th Ward, 1830 E 6400 S Murray. As per Carlos wishes his remains will be cremated. Cremation will take place the day after the funeral services.

Carlos Jiménez Cruz 1941 &#8211; 2016 Carlos Jiménez Cruz (our beloved Papa Carlos) peacefully passed away surrounded by his loved ones on Monday August 15, 2016 in Salt Lake City, Utah at the age of 74 as consequence of a respiratory failure... View Obituary & Service Information

The family of Carlos Jimenez Cruz created this Life Tributes page to make it easy to share your memories.