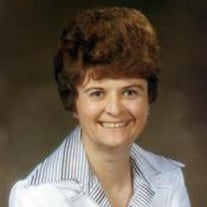 Carma Jane Cammans Bills passed away February 24, 2011 surrounded by her loved ones. She was 79 years old. Carma was born July 25, 1931 to Emma Taylor and Peter Adrian Cammans in Provo, Utah; she was the oldest of four children. Carma married Parley Edward Bills on January 21, 1950. They recently celebrated their 61st wedding anniversary. She is survived by her caring husband and her two treasured children: Edward Lee (Char) Bills, and Shannon (Rick) Coon. She also leaves behind her cherished and “much praised” grandchildren: Edward Troy (Rachel) Bills, Jennifer Bills, Sarah Bills, Shawn Coon, Katie Coon, and Dustin Dilley. She recently became a great-grandmother to Greyson Edward and Sophia. Her sister, Adrienne Curfew, her niece Barbara Garrison, and her nephew Cam Higgins also survive Carma. Preceded in death by her parents, sister, Nancy Nelson, and brother, “Buddy.” Carma lived most of her life in Magna, Utah graduating from Cyprus High School in 1949. She was a proud member of the famous Drum and Bugle Corp. Through the years, Carma had a variety of jobs starting with her first job at Sweets Candies. Later, she worked at her father’s drug store, Rexall Drug, where she was known to give away more sundaes than she ever sold. Carma also worked for the Bank of Commerce and Cyprus Credit Union where she made many close friends. But, the best times of Carma’s life were spent as the bookkeeper at Cyprus High School. Carma loved teenagers, especially her own; she enjoyed watching Eddie swim on the Pirate Swim Team, even though she used to hide her eyes every time he stepped on the bank. The highlight of her days at Cyprus was following Shannon and the Cyprus High School Spinnakers. She attended every competition and every performance. Carma was also a permanent fixture at the “ticket” windows at Cyprus High. Students and staff were drawn to Carma; she bought many lunch tickets, and she provided a warm, comfortable place for others to stop by and chat. Our wife and mom was a fierce advocate for her children and the people she loved. She considered her job as a mother to be her most important role. We will miss her love, tenderness, and humor. Godspeed, sweet wife, mom, and nana. There will be a private family celebration of her life, but no public ceremony. In lieu of flowers, please make donations to your favorite charity.

Carma Jane Cammans Bills passed away February 24, 2011 surrounded by her loved ones. She was 79 years old. Carma was born July 25, 1931 to Emma Taylor and Peter Adrian Cammans in Provo, Utah; she was the oldest of four children. Carma... View Obituary & Service Information

The family of Carma Jane Bills created this Life Tributes page to make it easy to share your memories.