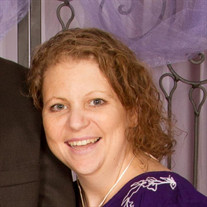 Carmel Blaire (Kimble) Prows was born to Kim Marilyn (Bunas) Kimble and Robert Michael Kimble on September 18, 1984 in Santa Clara, California. She grew up in San Jose, California and later moved with her family to the city of Brentwood in northern California where she graduated from Liberty High School in 2003. In 2004 Carmel moved to Salt Lake City, and later Syracuse Utah, where she met her husband Jeffrey in 2006. Carmel and Jeff were married in the Logan Temple on May 19, 2007 for time and all eternity. Carmel worked to support Jeff while he finished his degree in Mechanical Engineering at Utah State University. Carmel and Jeff welcomed their son Owen to their family in 2012. Because he was born prematurely, Carmel spent many hours in the University of Utah Primary Children’s Hospital until Owen was strong enough to come home. As a result of her experience with Owen, Carmel volunteered to help with the Hospital’s Parent-to-Parent organization in support of parents and families of premature children. Carmel had an excellent memory and could be counted on to recall almost any detail. She loved socializing, was a loyal friend, and kept in touch with friends and family throughout her life. Carmel loved to serve in her community. She helped at Cook Elementary School in their reading program and worked as a school crossing guard in her neighborhood. Carmel was quick to see a need in her circle of influence. She was often found delivering a meal or contacting a friend with a word of encouragement. Music was always an important part of Carmel’s life. She developed a beautiful singing voice and while attending Liberty High School, participated in the A Cappella Choir, Women’s Ensemble, and Women’s Chorus. Wherever Carmel lived she joined the ward choir. She accepted an invitation from a friend to sing in the Wasatch Community Choir where she was a loyal member for the past several years of her life. Carmel was a faithful member of the Church of Jesus Christ of Latter-day Saints. She served in many church callings, the most recent being as a ward choir director and compassionate service leader. Carmel dealt with many health problems throughout her life. When she was 17 years old she was diagnosed with kidney failure. Carmel’s mom donated a kidney to her in 2003 and when that kidney failed last year (2017), Carmel’s sister Claire donated another kidney. Carmel seemed to be doing well until she started feeling ill this past summer. Her cancer diagnosis was slow in coming. The cancer was not treatable. She passed away on Sunday, March 18, 2018. She died surrounded by family. Carmel was preceded in death by her father, Robert Kimble. She is survived by her husband and son, Jeffrey and Owen Prows, parents Donald and Kim Fink, her sisters Courtney Kimble, Leanne Smith (Terry), Claire Fink, Charlotte Dugger (AJ), and her brothers Carter Kimble, and Sam Fink. Funeral services will held Saturday, March 24th, 11:00 am at the LDS Church, 1350 So. 1800 W. Syracuse. A gathering will be held prior to services from 9:30 - 10:30 am. Interment, Syracuse City Cemetery.

Carmel Blaire (Kimble) Prows was born to Kim Marilyn (Bunas) Kimble and Robert Michael Kimble on September 18, 1984 in Santa Clara, California. She grew up in San Jose, California and later moved with her family to the city of Brentwood in northern... View Obituary & Service Information

The family of Carmel Blaire Prows created this Life Tributes page to make it easy to share your memories.