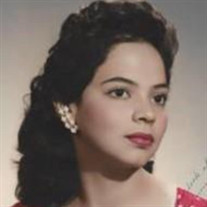 Carmen Diaz Lubecke 1930-2020 On Sunday, September 13, 2020, Carmen ‘Carmela’ Diaz Lubecke, age 89, left this life peacefully, surrounded by her loving family, happy to be reunited with her husband. Carmela, the second of eight children, was born in Mexico City to Manuel Diaz and Guadalupe Guzman. She studied French at the Alianza Francesa and was also fluent in English and Spanish. A schoolteacher for eleven years, she taught elementary and middle school. In addition, Carmela worked as a bookkeeper, helping her cousin at his TV repair shop. It was in that shop, in 1959, her life would change forever when she met Daniel Lubecke, an American tourist dropping in on a friend at that particular shop. Carmela quickly became Daniel’s favorite attraction in all of Mexico. The two fell in love at first sight and were married in Mexico City a few months later. Leaving behind everything she had known, Carmela bravely allowed herself to be whisked away to a new country with her sweetheart to begin a great adventure. They settled in Whittier, CA and she began her new life with the man she would love forever. What Carmela had always wanted most was to have a husband and children and was overjoyed to fulfill that dream, as she and Dan had two children, Susan and Victor. She lived the quintessential life of a wife and mother, playing both roles impeccably. Several years later, she became an American citizen. Anyone could tell that Carmela absolutely loved her life. When the kids grew up, Carmela took a clerical job at Zenith, where Dan was employed. The two of them continued to go to work together every day until Dan retired. Carmela then told him, “If you’re retiring, then I’m retiring too!” And she did. Always together, Dan and Carmela decided to move to Spanish Fork, UT in 1994. From there, they spent a lot of time exploring and traveling, visiting family all over the States and the world. When at home, they could often be found at the Spanish Fork Senior Citizen’s Center where they made many new and wonderful friends. They also loved going out to lunch every day. Every food place in town knew them and knew their order before they had to ask for it. Carmela’s greatest joy was her family. As much as she loved being a mom, she treasured her roles as grandmother and great-grandmother even more. She took care of everyone. Carmela was wholeheartedly devoted to her grandchildren and was an integral part of their daily life. She loved her family deeply and was, and will always be, a wonderful example to us all. We are going to miss her more than words can ever express. She is survived by her two children, Susan Fay (Dennis) of Spanish Fork, UT, and Victor Lubecke (Olga) of Honolulu, HI; her grandkids and great-grandkids; her sisters Tere Diaz of Mexico City, Margarita Guzman of Monterrey, Mexico, and her brother Fernando Diaz of Mexico City. Carmela was a lifelong, devout Catholic. Services will be held Thursday, September 17, 2020, at San Andres Catholic Church, 315 East 100 North in Payson, UT. A viewing will be held from 11:00-11:30am with a eulogy then preceding the funeral mass at 12:00pm. Due to COVID, masks will be required. Internment will then follow at the Utah Veteran’s Cemetery in Bluffdale, UT. The family would like to express their profound gratitude to the caregivers of Hearts for Hospice, especially Roy and McKenna, who are now like a family to us and also the awesome and loving caregivers at Orem Rehab and Nursing. They all called her “Grandma” and took wonderful care of her. Their invaluable help made it possible for her to live at home until the very end. If you have a loved one suffering from Alzheimer’s Disease or Dementia, go to https://www.alz.org/ for information and resources.

The family of Carmen Diaz Lubecke created this Life Tributes page to make it easy to share your memories.