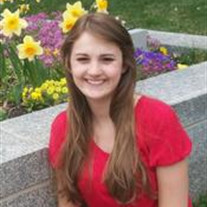 Carmody Sagers, age 22, passed away in a Salt Lake City hospital on February 17, 2013 of complications following an acute liver illness of only a week's duration. She was born January 23, 1991, in Ft. Worth, TX, the fourth child of Richard Cameron and Ruth Marlene Swindler Sagers. In 2009 Carmody graduated from Fossil Ridge High School in Ft. Worth. She was a scholarship recipient at Brigham Young University, enrolled in her senior year as a major in Food Science, Nutrition and Dietetics. She was also a resident assistant in her housing complex at BYU. Carmody is survived by her parents of Ft. Worth, and by her married siblings: Chantelle Sagers Clawson and Larry Clawson of Reno, NV; Orrin Sagers and Caroline Rodgers Sagers of Haslett, TX; Jason Sagers and Alicia Poulsen Sagers of Austin, TX; many nieces, nephews, aunts and uncles on both the Swindler and Sagers lines; paternal grandparents, Richard D. and Pauline S. Sagers of Provo; and many friends and classmates at BYU. Funeral services will be on Saturday, February 23, 2013 at 11:00 a.m. in the BYU multi-ward chapel located at 1915 North Canyon Road, Provo UT. She will be buried in the East Lawn Memorial Gardens in Provo, Utah, near her maternal grandparents, Calvin and Gertrude Swindler. Like any true Texan, she loved and embraced her Southern roots and had fond likings of Texas icons such as boots, wildflowers, rodeos, severe thunderstorms, and Blue Bell ice cream. At the age of 12 she earned her Amateur Radio license and was granted the FCC call sign KD5ZON. Her dad, who is also an Amateur Radio operator, got her interested in learning Morse code at a young age solely for the purpose of sending secret messages to each other at the dinner table. If an animal existed on this earth that was cute and fluffy, Carmody loved it. Throughout her growing up years she exercised this by bringing home and caring for a number of hamsters that she adored and loved. She enjoyed nature and surrounded herself with its beauty: flowers, butterflies, squirrels, ducks, bluebonnets, the sunlight, and rainbows. At age 14, Carmody was diagnosed with celiac disease. Instead of focusing on the limitations that accompanied the diagnosis, she began to educate herself about cooking and food, fast becoming an excellent gluten-free cook. In high school, she even wrote her own gluten-free cookbook and sent a copy to her older sister. Her love of cooking motivated her to major in dietetics and nutrition, specifically for the purpose of educating others who might also have dietary challenges. Despite numerous health challenges that presented her with many day-to-day obstacles to overcome, Carmody always did her best in school. Because of her valiant efforts, Carmody graduated in the top ten in her high school class and attended Brigham Young University on scholarship for four years. She loved to help other people and never had a problem living up to her high standards, even encouraging others around her to do the same. Despite the challenges that her own health presented her with, she found immense happiness in offering service to others, a gift that she was able to utilize often during her appointment as an RA. She loved her family and friends with equal enthusiasm, always wanting to get another laugh out of her siblings. She served others by happily contributing delicious meals to family and friends. Carmody’s last eight months were spent in wonderful relationship with her boyfriend, Mike Watson, who made her very happy. Carmody was a beautiful spirit and Heavenly Father saw fit to give her significant hurdles to overcome and to grow from. During life on earth, Carmody successfully endured her challenges while simultaneously lifting other people. We will miss Carmody dearly, but have been so blessed with the assurance that she is happy and anxiously engaged in fulfilling assignments on the other side of the veil.

Carmody Sagers, age 22, passed away in a Salt Lake City hospital on February 17, 2013 of complications following an acute liver illness of only a week's duration. She was born January 23, 1991, in Ft. Worth, TX, the fourth child of Richard... View Obituary & Service Information

The family of Carmody Sagers created this Life Tributes page to make it easy to share your memories.