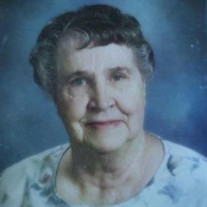 Born Carol Ann Weinberg on October 13, 1931, in Detroit, Michigan, to Floyd and Ann Weinberg. She married the love of her life & her lifelong husband, Norman Harold Wood (now deceased), on October 27, 1948, in the state of Arkansas. After Norman’s death -who she lovingly called ‘Harold”- in 2002, she moved from Cottage Grove, Oregon to Ogden, Utah for her declining years. Carol passed on August 2, 2020, of natural causes, while at her residence, in Farr West, Utah, under the loving care of those around her. Carol’s children, and their spouses are: Joyce Halterman, Doris Perry (spouse- Robert "Bob” Shwartz (deceased)), Phillip (spouse- Daleena), Cheryl (spouse- Sam Boatman), Thomas (spouse- Melodie), Teresa Dix & Eric Wood (deceased). Carol was also the Grandmother to 18 children, the Great-Grandmother to 21 children and Great-Great Grandmother to 2 children (with another on the way). Carol was also preceded in death by her Mother, Father, 2 brothers and 2 sisters. She has one remaining sibling alive, her sister Francis. She was also preceded in death by 4 Grandchildren; Lee Ann Mahoney, Carla Rae Mahoney, Sherry Marvel and Christopher Dix. Carol was very proud of her dramatic reading skills, from her high school days. After most of her children were born, she worked several years at West Valley hospital as a volunteer. Her skills and desires to care for others were well recognized and she became the first, ever, receiver of a scholarship, from the hospital, to attend Nursing School. Carol did well in Nursing School, while attending Utah Technical College, in Salt Lake. She was rightfully proud of achieving and maintaining a high grade-point average. She graduated with an Associate’s degree in nursing and obtained her license to work as a Licensed Practical Nurse. Carol continued to work for West Valley hospital until she moved to Santa Clara, Utah, where she became the Director of Nursing at Porters nursing home, where she took pride and enjoyment in caring for the elderly. Her greatest achievement though, may have been successfully raising seven children, who went on to become positive contributors to society. Carol’s passing is mourned by many. May she rest in peace and enjoy eternity with those who have preceded her in death and with those who will follow. Graveside services will be held Thursday, August 6th, 11:00 am at Redwood Memorial Cemetery, 6500 So. Redwood Rd. West Jordan, Utah.

Born Carol Ann Weinberg on October 13, 1931, in Detroit, Michigan, to Floyd and Ann Weinberg. She married the love of her life & her lifelong husband, Norman Harold Wood (now deceased), on October 27, 1948, in the state of Arkansas. After... View Obituary & Service Information

The family of Carol Ann Wood created this Life Tributes page to make it easy to share your memories.