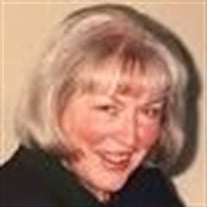 Carole Sessions August 20, 1940 ~ March 27, 2018 Carole Sessions, 77, passed away peacefully with her family by her side on March 27, 2018. She was born August 20, 1940, in Ogden, UT, to Harland and Alta (Briggs) Montgomery. She graduated from Davis High in 1958. Carole married Stephen Sessions in 1959, and they later divorced. Carole worked for Safeway, Inc. from 1965 to 1990, and for HAFB Commissary from 1990 until she retired in 2015. Carole flourished in her younger years, having fun and enjoying the moment. In her later years, her favorite activity was going to breakfast with close family and friends, and she never went to breakfast without her beloved coupons. She enjoyed listening to loved ones stories and enlightened anyone she could about those she cherished. She was a very independent, strong willed woman and will be greatly missed. Carole is survived by her daughter, Julie (Troy) Workman; sister, LaRae (Dan) Struhs; sister-in-law, DeeAnna (Bob) Montgomery; brother, Duane (Donna) Montgomery; grandson, Tyler Workman; and granddaughter, Keely (Kyle) Semrow. She was preceded in death by her parents, Harland and Alta (Briggs) Montgomery; and her brother, Bob Montgomery. Graveside services will be held Monday, April 2, 2018, at 1 p.m. at the West Point Cemetery, 80 N. 4000 W. in West Point, UT. Condolences may be given at: www.premierfuneral.com

The family of Carole Sessions created this Life Tributes page to make it easy to share your memories.