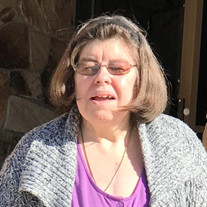 Catherine Marie Smith passed away at age 62, early Saturday morning, March 28, 2020, in Orem, Utah, with her loving and devoted husband by her side. Catherine Marie Hurley was born in Baltimore City, Maryland on December 14, 1957 to Joan Hurley. Catherine has an older sister, Pam Collins and younger sister, Millie McKenzie who both currently reside in Baltimore. As a single adult, Catherine took pride and satisfaction in working with the same family for 8 years as a nanny. In November of 1997, she met the love of her life, Dennis K. Smith, at an LDS Singles Stake Dance in Oakton, Virginia. They danced every dance together that night. It was love at first sight for Catherine and love at second sight for Dennis. They were married and sealed for time and all eternity on March 30, 1999 in the Washington D.C. temple. At the time of Catherine’s passing, the happy couple had been married nearly 21 years. Since Catherine and Dennis were sealed in the temple, they have an eternal marriage. This means they’re still married. They will be together in the Spirit World and Celestial Kingdom as husband and wife, where they will have and raise children—sons and daughters. They spent their first years of marriage in Silver Spring, Maryland. On July 27, 2009, the couple embarked on a voyage to Utah, where she and her husband found belonging in their ward, along with support from extended family. Catherine enjoyed being known as the grandma of their ward. She taught primary for almost three years. She was devoted to her faith, her husband, and her pets. She spent her free time cross-stitching, knitting, and making afghans for weddings and newborn babies. She had a vast collection of beanie babies and precious moment dolls. She was also known for getting a good deal, shopping on QVC, talking about her favorite movies and TV shows, and had a hearty laugh that was absolutely contagious. Catherine is survived by her husband Dennis Smith and endearing pet dog, Sophia. A private family viewing will be held Wednesday April 1, 2020 at Premier Funeral Services in Orem, Utah. Her burial will be conducted the following day: Thursday, April 2, 2020, in St. George, Utah. A memorial service will be held later this year to commemorate her life. The date and time for this service are yet to be determined. A special Thank You from the family to Laura Maggard and those who have been lovingly involved in caring for both Dennis and Catherine; to the late Brother Bill Fox who sealed them; and to the North Orem Stake and Members of the 3rd Ward for their support at this time of need.

Catherine Marie Smith passed away at age 62, early Saturday morning, March 28, 2020, in Orem, Utah, with her loving and devoted husband by her side. Catherine Marie Hurley was born in Baltimore City, Maryland on December 14, 1957 to Joan Hurley.... View Obituary & Service Information

The family of Catherine Marie Smith created this Life Tributes page to make it easy to share your memories.