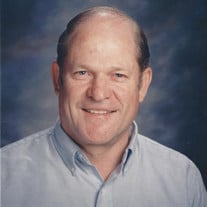 Chadwick E Smith 1934 - 2018 Chadwick E Smith (Chad), son of Othello H and Addie Carter Smith passed away at his home in West Bountiful, UT Sunday, January 14, 2018 at the age of 83, due to complications related to Parkinson’s Disease. Chad was preceded in death by his parents; Othello H and Addie Carter Smith, and two brothers; Othello Smith (Smitty) Jr, and Pauldin Leroy Smith. He is survived by his wife Dianne of West Bountiful; brother George Austin Smith (Winn) of Fremont, CA; daughters Kimberly Cosby (Dan) of South Jordan, UT, Terrilyn Brown (Jeremy) of West Jordan, UT; sons Christopher (Sarah) of Moore, ID and Todd (Jennifer) of Kaysville, UT; 10 grandchildren (nine of which were girls) and 2 great - grandsons. Chad was born in Minersville, Beaver County, UT on October 30, 1934 in the home of his grandparents, Hayward and Inez Carter. He was the youngest of 4 sons. At the time of his birth his father was working for the Union Pacific Railroad in Los Angeles, CA where they were living. His grand parents had never had any of their 10 children leave Minersville so they persuaded his parents to have his mother come home and be with them when he was born. His mother returned to her birthplace so Chad could be born in Minersville. When he was five his father obtained a job in Trona, CA as a painter for the American Potash & Chemical Corp. They lived in the small community of Ridgecrest and eventually obtained company owned housing in Trona where Chad attended school and graduated from Trona High School. Here he had many leadership opportunities including serving as Student Body President. He loved playing all sports and followed in his brother’s footsteps as quarterback on the Trona High School Football team. His love of sports followed him throughout his life. After high school Chad pursued his education attending UCLA, and Berkley. He interrupted his education to serve as a missionary for 3 years and 3 months in the Southern Far East Mission for the LDS Church, with headquarters in the Crown Colony of Hong Kong on the mainland of China. Chad was among the last of the missionaries to travel by ship to Hong Kong – a trip of 18 days. Except for six months on special assignment, as a traveling Elder on the Island of Taiwan, his mission was spent entirely in the Colony of Hong Kong where it was necessary to learn the Cantonese dialect of the Chinese language. After his mission he enrolled at Oakland City College where once again his education was interrupted as he received a draft call. He fulfilled his military obligation by joining the U.S. Army Reserve in April of 1960 and completed basic training at Fort Ord, CA. He completed his military duties as a Medical Corpsmen in Fort Sam Houston in San Antonio, Texas. After his military service he again enrolled in Oakland City College and worked part time for Shell Development Company, a research division of Shell Oil Company, as a chemical laboratory assistant in basic plastic polymer research for two years. In 1962 he transferred to BYU where he obtained what he said was “the finest and best education of the whole man, spiritual, intellectual and physical than any school he had attended.” Here he received his Bachelor’s Degree in Biology along with a teaching credential, became an avid, loyal BYU Cougar fan and met his wife Dianne Dredge. They were married April 3, 1970 in the Logan Temple. After their marriage Chad worked as a graduate assistant to Dr. Lee Braithwaite in the Zoology Department at BYU while working on his Master’s Degree in Zoology. He received his Master’s Degree in 1972 along with becoming certified to teach Seminary for the LDS Church. After completing his education at BYU Chad moved his family to Bountiful, UT where he taught Seminary at Viewmont High School and worked during the summertime for Bailey’s Moving and Storage. When Baileys offered him a full time job as salesmen and then as an office manager Chad left his chosen profession of teaching for a few years. In 1976 Chad moved this family to West Bountiful, renewed his teaching credential and for the next 20 years taught Science and Health, first at Churchill Jr. High in the Granite School District and then at Central Davis Jr. High in the Davis School District where he retired in 2005. Chad’s love of his family, teaching, reading, sports, photography and service in the LDS church were his passions throughout his life. He was a wonderful father and grandfather. He was a disciple of Jesus Christ. Chad and Dianne were married for nearly 48 wonderful years. After they retired from teaching in 2005, they worked together in the Bountiful LDS Temple for nearly 10 years, and served for eighteen months in the Oklahoma Tulsa Mission for the LDS Church. We loved boating, four wheeling, working together as a family delivering newspapers in the early mornings before school and selling fireworks earning a TV and a trip to Disneyland. The Family wishes to express their deepest thanks to all of the health care agencies and workers who lovingly helped his wife Dianne care for Chad at home: Dan Cosby with Premier Home Health; Tajia Wilson, Lisa Deguenon, Suzie Nelson, Amy Neilson; Jon Mather with Adagio Hospice; Rosemary Wall, Justin Banks, and Premier Funeral; Jared Fairbanks and his staff. Friends and family are invited to attend a viewing in honor of Chad on Sunday evening January 21, 2018 at the West Bountiful 6th Ward LDS Chapel, 1750 N 900 W from 6-8:30 pm. There will also be a viewing on Monday, January 22, 2018 prior to the funeral services for Chad which will be held in West Bountiful, UT at the 9th Ward LDS Stake Center, 1930 N 600 W, from 10:00 – 11:30 am, Monday, January 22, 2018. The Funeral will begin at 12 noon following that viewing. The Interment will be at the Bountiful City Cemetery, 2224 South 200 West, Bountiful, UT In lieu of flowers, memorial donations may be made to any charity relating to Parkinson’s Disease Research.

The family of Chadwick E Smith created this Life Tributes page to make it easy to share your memories.