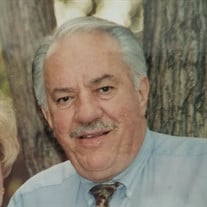 Charles Lynn Bailey, 77, Clinton UT, passed away July 15, 2017, from complications of Parkinson’s Disease. He was born September 4, 1939 in Fairview UT to Elna Fan Tucker and Charles Allyson Bailey. When he was 2 years old his father was killed in an industrial accident, so Charlie was raised by his step-father, Buford Christensen. He married Betty K Dahl, together they had 4 children. Betty passed away Dec 1995. He married Jean Morrison in 2000. He was owner, operator of Energy Express, a trucking Company, and also worked at Murdock Chevrolet and even drove a special needs school bus in Anchorage, Alaska. He was an active member of the Church of Jesus Christ of Latter-day Saints. His favorite position was in the High Priest Group Leadership. Growing up Charlie had many adventures and misadventures being raised in Fairview, UT. He loved life and lived it to the fullest. He was a wonderful, loving husband, father and grandfather with a heart of gold! He loved his family, fishing, hunting, and driving in the mountains. He is survived by his loving wife Jean, his children, Shaun (Tracy) Bailey, Seth (Cherise)Bailey, Angela (Jared) Vargason, Cody (Stephanie) Bailey and step children, Susan (Jerry) Floyd, Obe (Jeanene) Lowry, Jeremy Lowry and Audra (Spencer) Frew, brother Reg (Carol) Christensen, and sister Norma (Tom) Johnson. Preceded in death by his parents, 2 brothers, and a step-daughter. Funeral Services will be at 11:00 a.m. on Wednesday, July 19, 2017 at the Clinton 25th Ward Building located at 2841 West 1300 North, Clinton, UT. The family will visit with friends from 6:00 to 8:00 p.m. on Tuesday, July 18th and one hour prior to the services at the church.

Charles Lynn Bailey, 77, Clinton UT, passed away July 15, 2017, from complications of Parkinson&#8217;s Disease. He was born September 4, 1939 in Fairview UT to Elna Fan Tucker and Charles Allyson Bailey. When he was 2 years old his father... View Obituary & Service Information

The family of Charles Lynn Bailey created this Life Tributes page to make it easy to share your memories.